The 248 metre-long Kaga, which can operate several helicopters simultaneously, will make stops in India, Sri Lanka and Indonesia. 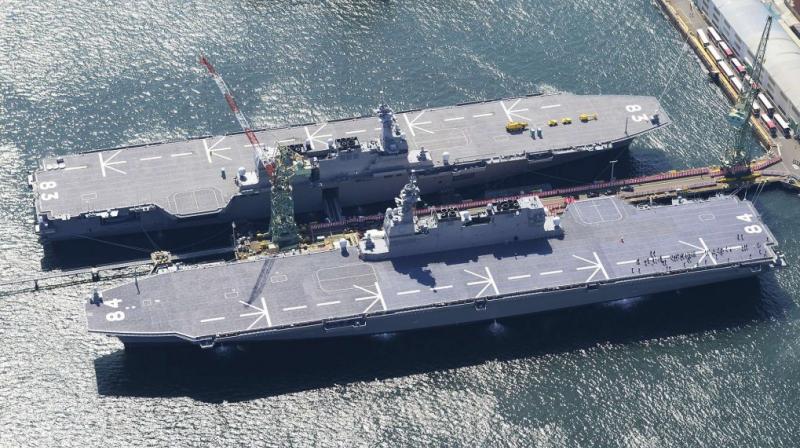 The Kaga (bottom), which will be accompanied by an escort ship, may also conduct ad hoc joint drills with warships from other counties in the region, they said. Its sister ship, the Izumo (top), was on the same tour last year. (Photo: AP)

Tokyo: Japan will send a large helicopter carrier to the South China Sea and Indian Ocean for a second straight year as it looks to bolster its presence in the strategic maritime region with annual tours, two Japanese officials said.

"This is part Japan's efforts to promote a free and open Indo-Pacific," said one of the officials, who has direct knowledge of the plan for a two-month tour beginning in September.

The 248 metre-long Kaga, which can operate several helicopters simultaneously, will make stops in India, Sri Lanka and Indonesia, said the sources who asked not to be identified because they are not authorized to speak to the media.

The Kaga, which will be accompanied by an escort ship, may also conduct ad hoc joint drills with warships from other counties in the region, they said.

Japan last year sent its sister ship, the Izumo, on a similar tour of the contested South China Sea and the Indian Ocean.

A spokesman for Japan's Maritime Self Defense Force said he was unable to comment on future operations.

Japan's growing visibility in those waters reflects concern it shares with the United States over China's military presence in a region through which trade routes pass that are vital to the Japanese and U.S. economies.

China, which says its intentions are peaceful, claims most of the South China Sea and has built bases on reefs and shoals it has reclaimed. China has also increased naval operations in the Indian Ocean.

The United States holds regular air and naval patrols in the South China Sea, saying it has to ensure freedom of navigation.

In May, it changed the name of its military Pacific Command headquarters in Hawaii to Indo-Pacific Command to signal a broader regional strategy that has been promoted by Japan and Australia, stretching from the Western Pacific to the Indian Ocean.

Japan has not taken part in the US freedom of navigation operations in the South China Sea because doing so could provoke China which could increase its military presence in the East China Sea where the rivals are locked in a dispute over ownership of uninhabited islets known as the Senkaku in Japan and Diaoyu in China.

Amid growing tension over trade and Chinese suspicion of U.S. intentions toward self-governing Taiwan, Chinese President Xi Jinping in June told U.S. Defense Secretary Jim Mattis that China was committed to peace but would not yield "even one inch" of territory handed down by its ancestors.

Malaysia, Vietnam, the Philippines and Brunei also claim parts of the South China Sea, which has rich fishing grounds, as well as oil and gas deposits. Taiwan also claims the sea but Japan has no claim to any part of it.

In the Indian Ocean, tension between China and India has flared over China's growing presence in the Maldives, which despite long-standing political and security ties with India has signed up to China's Belt and Road initiative to build trade and transport links across Asia and beyond.

In order for Japan to take a wider regional role, Prime Minister Shinzo Abe's government has stretched the limits of a post-war pacifist constitution by sending warships, planes and troops on overseas missions.

The Kaga, which is as big as any aircraft carrier operated by the Japanese Imperial Navy in World War Two, is designated as a destroyer to keep it within the bounds of those constitutional restraints.

Based in Kure in western Japan, the Kaga was commissioned in March last year and its primary mission is anti-submarine warfare. Its tour of the South China Sea and Indian Ocean follows a two-month trip to the region from May by the Osumi, an amphibious transport ship.