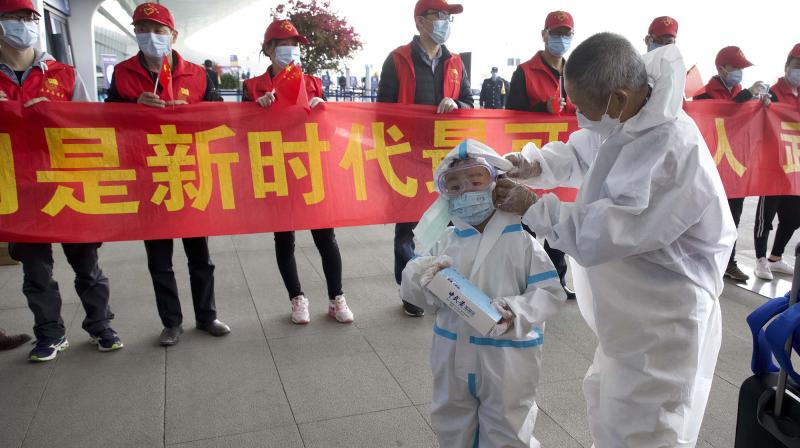 Beijing: The last three coronavirus patients in Wuhan, the first epicentre of the COVID-19, have been discharged and the central Chinese city has recorded zero cases of the virus after mass testing of about 10 million people, state-media reported on Friday.

According to the China's National Health Commission (NHC), five imported cases, including four in Shanghai and one in Sichuan Province, were reported in China on Thursday.

Also on Thursday, three new asymptomatic cases were reported taking the total of such cases under medical observation to 297, the NHC said.

As of Thursday, the overall confirmed cases on the mainland have reached 83,027, including 66 patients who were still being treated, and 78,327 people who had been discharged after recovery.

Altogether 4,634 people have died of the disease, the NHC said.

The last three COVID-19 patients in Wuhan, capital of the Hubei Province, have recovered and been discharged from a hospital, state-run People's Daily reported on Friday.

They were discharged on Thursday after they tested negative for two nucleic acid tests within 24 hours, their temperatures fell to normal levels and their symptoms disappeared, according to the report.

By Thursday, all COVID-19 patients in Hubei, the province most affected by the COVID-19 epidemic in China, have been discharged from the hospitals. In total, the province reported 68,135 cases, with 63,623 recovered and discharged. In all 4,512 people died due to coronavirus in the province.

As of Wednesday, Wuhan still has 245 people with asymptomatic symptoms were under quarantine.

Asymptomatic cases also known as silent spreaders, pose a problem as the patients are tested COVID-19 positive but develop no symptoms such as fever, cough or sore throat. However, they pose a risk of spreading the disease to others.

All districts in Wuhan, about 10 million have been tested and are now assessed to be low risk for the coronavirus infection. Dongxihu district, the last medium-risk district in the city, reported zero new cases for 14 consecutive days to June 1 and its risk level was adjusted to low on June 2, the report said.