Addressing a seminar on 'Wuhan Summit: Sino-India Relations and its Way Forward', Luo said BRI would benefit all countries, including India. 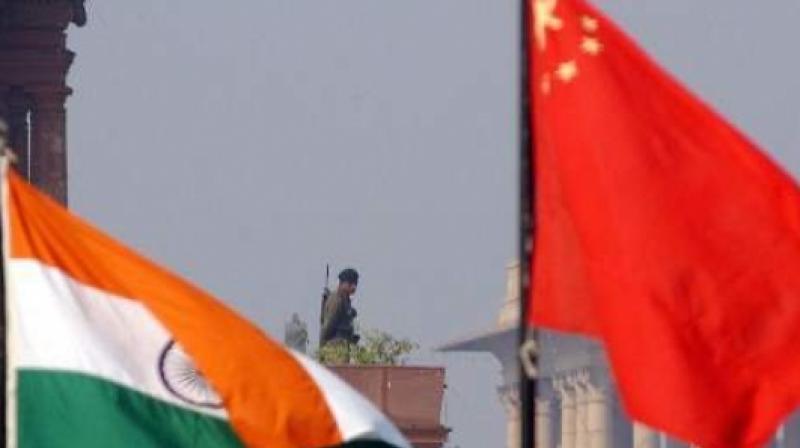 The BRI, a multi-billion-dollar initiative launched by President Xi Jinping when he came to power in 2013, has become a major irritant in bilateral ties. (Photo: PTI)

New Delhi/ Beijing: China on Friday said it was "quiet normal" for it to push ahead with the Belt and Road Initiative (BRI), a sticking point in Beijing's ties with India, but maintained that the two "major powers" could find a way to cooperate, especially after the Wuhan summit.

Addressing a seminar on 'Wuhan Summit: Sino-India Relations and its Way Forward', Luo said the BRI would benefit all countries, including India, in the age of globalisation.

The BRI, a multi-billion-dollar initiative launched by President Xi Jinping when he came to power in 2013, has become a major irritant in bilateral ties.

The BRI also includes the China-Pakistan Economic Corridor (CPEC) which India opposes as it goes through Pakistan-occupied Kashmir.

"We seek common development through connectivity," Luo said as some Indian lawmakers, scholars and journalists raised the issue of the BRI during the seminar addressed by China's envoy on the outcomes of the April 27-28 informal summit between Chinese President Xi and Prime Minister Narendra Modi.

He said it was "quite normal" for China to push for the BRI among countries in the region, while describing India as a "major power" as well as an emerging market.

Luo also said that China wanted to share the fruits of its economic development with other countries and those like the US and the UK have benefited from China's growth.

Soon after the Wuhan summit ended, Chinese Vice Foreign Minister Kong Xuanyou had said there was no fundamental difference with India on the issue of "inter-connectivity" and Beijing will "not be too hard" with New Delhi on the issue of the BRI.

"We feel that there is no fundamental difference between China and India on the issue of supporting inter-connectivity," Kong had told the Chinese media.

"The Indian side does not exclude this cooperation. It is also continuing to advance on interconnection."

"As for whether India accepts the expression Belt and Road, I think it is not important and China will not be too hard on it," he had said.

He had also referred to India's participation in the Bangladesh-China-India-Myanmar (BCIM) corridor which is also part of the BRI.

Another highlight of the informal summit, a "very special event" in Chinese diplomacy, Lu said, was the decision of President Xi and Prime Minister Modi to undertake a joint economic project in war-torn Afghanistan.

Referring to the unresolved boundary issue, the Chinese ambassador said it was a matter leftover from history and it cannot be resolved overnight.

While China claims Arunachal Pradesh as Southern Tibet, India asserts that the dispute covered Aksai Chin area which was occupied by China during the 1962 war.

During the Wuhan summit, Luo said, both sides have agreed to properly manage and control their differences.

Both sides have the maturity and wisdom to handle their differences through peaceful discussion and by respecting each other's concerns and aspirations.

Further, the two leaders have agreed to use the Special Representatives' Meeting on the boundary issue to seek a fair, reasonable and mutually acceptable settlement.

The two militaries will strengthen confidence-building measures and enhance communication and cooperation to uphold border peace and tranquillity.

Luo said China and India would also address the issue of trade imbalance and Beijing would open up its market for more Indian products.

He cited Beijing's announcement yesterday to exempt import tariffs for 28 drugs, including all cancer drugs, from May 1.

This, the envoy said, was good news for India's pharmaceutical industry and medicine exports to China.

"I believe this will help reduce trade imbalance between China and India in the future," he said.

President Xi and Prime Minister Modi also discussed the Korean peninsula and relations with the US as well as Russia, Luo said.

He said both sides have agreed to promote more active regional and international cooperation.

During the wide-ranging informal talks, the two leaders have agreed to cooperate in offering innovative and sustainable solutions to global challenges such as epidemics, natural disasters, climate change and terrorism, he said.

As the two major countries in Asia, China and India will use their political influence and economic power to reinvigorate regional economic development.

The two countries will work together to make international relations more democratic and increase the representation and say of developing countries and emerging markets.

Both leaders also agreed to support the multilateral trading regime, oppose protectionism and work for an open, inclusive, balanced and win-win economic globalisation that benefits all.