The Tokyo District Court said it had accepted a request from prosecutors to detain the 65-year-old auto tycoon for a further 10-day period. 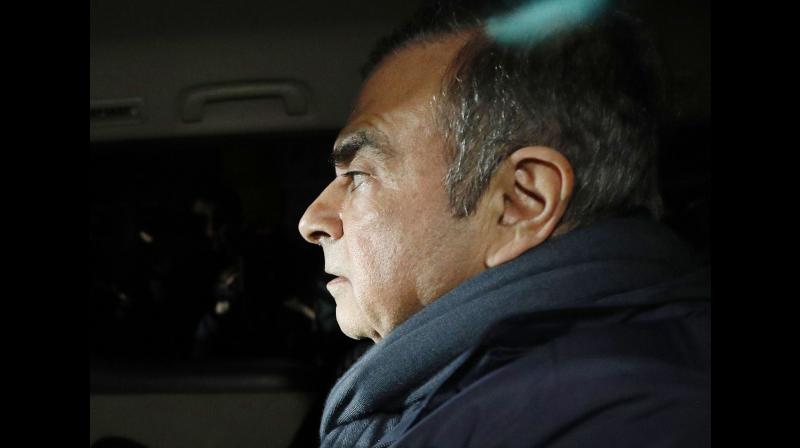 Authorities are looking into new allegations that Ghosn transferred some USD 15 million in Nissan funds. (Photo:AP)

Tokyo: Former Nissan boss Carlos Ghosn will remain in custody until at least April 14, a Japanese court ruled on Friday, as prosecutors quiz him over fresh allegations of financial misconduct.

The Tokyo District Court said in a statement it had accepted a request from prosecutors to detain the 65-year-old auto tycoon for a further 10-day period that can subsequently be extended once more.

The "full term of the detention is 14th" of April, the court said.

Authorities are looking into new allegations that Ghosn transferred some USD 15 million in Nissan funds between late 2015 and mid-2018 to a dealership in Oman.

They suspect around USD 5 million of these funds were siphoned off for Ghosn's use, including for the purchase of a luxury yacht and financing personal investments.

Prosecutors say Ghosn "betrayed" his duty not to cause losses to Nissan "in order to benefit himself."

Ghosn denies the allegations and says he is also innocent of the three formal charges he faces: two charges of deferring his salary and concealing that in official shareholders' documents, and a further charge of seeking to shift investment losses to the firm.

Stephen Givens, an American attorney practising law in Japan since 1987, told AFP the latest allegations were the most serious yet.

"If the facts are true... that is stealing from the company, that is embezzlement, that is terrible," said Givens, who is not connected with the Ghosn case.

"If that's true, it is a serious charge. It differs very significantly from the previous charges that seem minor and technical. These are hurting Nissan or Nissan shareholders and benefiting Ghosn," Givens added.

Justice Minister Takashi Yamashita, a former Tokyo prosecutor himself, hit back at growing criticism of the Japanese system, sometimes described as "hostage justice" due to long detention periods for suspects aimed at forcing a confession.

"I understand that it is being handled appropriately in accordance with the stipulation of the code of criminal procedure. So the criticism is not warranted," Yamashita told journalists.

Ghosn launched a counter-attack in an interview with French television TF1 recorded just before his dawn arrest on Wednesday.

Describing himself as "a combative man and an innocent man", he vowed to "defend myself to the bitter end".

And he voiced concern that he would not be given a fair trial, with around 99 per cent of trials in Japan resulting in a conviction.

"I have doubts over the way the judgement will take place. If there is a fair ruling, I am very confident but if it is not fair, I am worried about what will happen," said Ghosn.

At the end of the initial 10 days of questioning, prosecutors can request a further 10-day extension. After this, they must either press formal charges, release him without charge or re-arrest him to probe further allegations.

In his French TV interview, Ghosn lashed out at the conditions in the detention centre, saying he was deprived of his watch, forced to sleep with the light on and forbidden from contact with his loved ones.

"I wouldn't wish what I have suffered on my worst enemy," he said.

Ghosn spent 108 days in the detention centre in northern Tokyo before being dramatically released on bail of around USD 9 million on March 6, emerging from incarceration dressed in a workman's uniform and face mask in an apparent bid to avoid the media.

He had since lived in a court-appointed apartment in Tokyo without commenting on his situation despite huge international and Japanese media interest in his case that has shocked and surprised from the beginning.

However, just as reports began to surface that he could be rearrested, Ghosn emerged on Twitter to announce plans to hold a news conference on April 11.

With this now impossible, his lawyer Junichiro Hironaka said Ghosn had pre-recorded a video but refused to give details of the contents or when it would be released.