Abbasi said that he himself has highlighted the Kashmir issue in all his meetings at the UN and the Organisation of Islamic Conference. 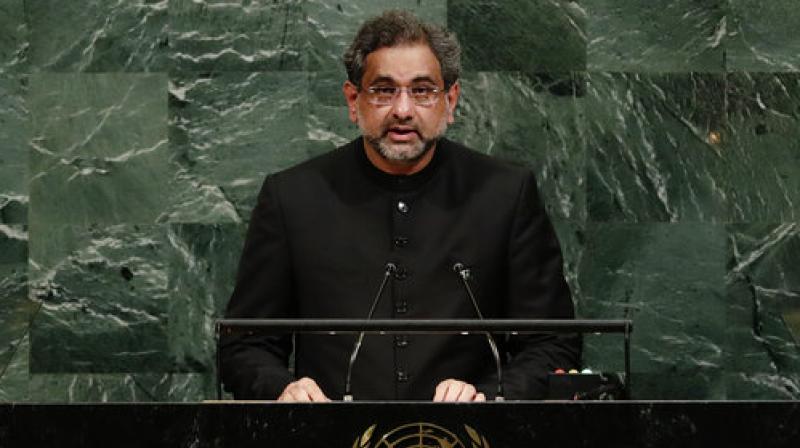 Speaking to the representatives of Hurriyat conference in Muzaffarabad, the premier assured that the government, the people and all political parties will continue to “vigorously provide moral, diplomatic and political support to Kashmir cause.”

He said Pakistan has always supported the implementation of United Nations Security Council (UNSC) resolutions that “call for granting right to self-determination to the people of Kashmir.”

Mr Abbasi said that he himself has highlighted the Kashmir issue in all his meetings at the UN and the Organisation of Islamic Conference (OIC).

Earlier, Prime Minister Abbasi emphatically stated that Pakistan stands shoulder to shoulder with its Kashmiris in their “just struggle for the right to self-determination.” He was addressing the joint session of Pakistan Administrated Jammu and Kashmir Legislative Assembly and Kashmir Council in Muzaffarabad on Wednesday.

The Prime Minister alleged the Indian forces had been unleashing wave of terror on innocent Kashmir people over the last seven decades but they have miserably failed to suppress their voice. He claimed Kashmir was an internationally recognized dispute and its resolution lies in a plebiscite according to the UN Security Council resolutions.

Regretting the recent wave of terror unleashed by Indian troops in the valley, the Prime Minister said Indian authorities were resorting to such failed tactics in order to crush the voice of Kashmiri people.

Mr Abbasi said the government, the people and all political parties were united on the Kashmir issue and will continue to extend moral, political and diplomatic support to the Kashmiris.   He said Pakistan has taken a strict stance on recent Indian ‘brutalities’ in Kashmir, demanding of India to allow the UN human rights commission to investigate the “human rights violations.”

Mr Abbasi said the Muslim countries had also voiced their concerns over the “atrocities in Kashmir.”

The Prime Minister was confident that the Kashmiri people will come out “victorious in their just struggle” and their “sacrifices will bear fruit.” He said Kashmir dispute was also a challenge to the “conscience of international community.”