China backs Pak's 'quest for peace through dialogue' with India

The ties between India and Pak had strained after terror attacks by Pakistan-based groups in 2016 and India's surgical strikes inside PoK. 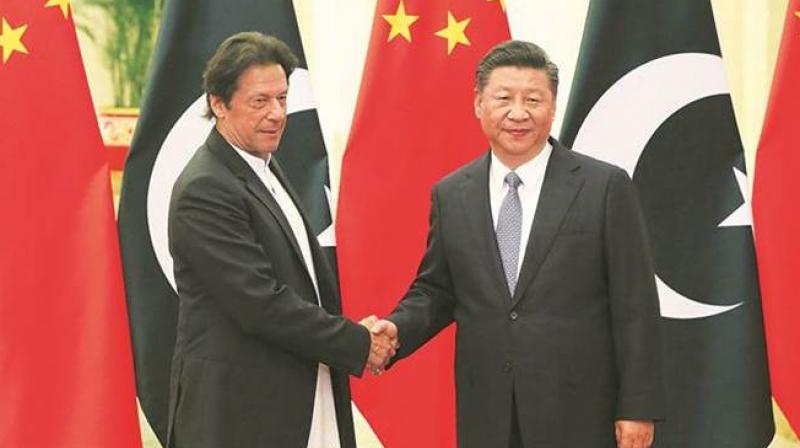 In recent years, China has refrained from taking a public stance on the India-Pakistan ties, expressing hope for resolution of the disputes through dialogue. (Photo: AP)

Beijing: China on Sunday said it supported Pakistan's "quest for peace through dialogue" to settle the outstanding disputes with India and backed Islamabad's engagement with the Nuclear Suppliers Group (NSG).

A joint statement, issued here after Prime Minister Imran Khan's talks with Chinese President Xi Jinping and Premier Li Keqiang, said that China backed Pakistan's efforts to improve ties with India to settle "outstanding disputes", without directly mentioning the Kashmir issue. "China appreciates Pakistan's quest for peace through dialogue, cooperation and negotiation, on the basis of mutual respect and equality, and supports Pakistan's efforts for improvement of Pakistan-India relations and for settlement of outstanding disputes between the two countries," the joint statement said.

The ties between India and Pakistan had strained after the terror attacks by Pakistan-based groups in 2016 and India's surgical strikes inside Pakistan-occupied Kashmir.

In recent years, China has refrained from taking a public stance on the India-Pakistan ties, expressing hope for resolution of the disputes through dialogue.

On the Kashmir issue, China's oft repeated stand was that it should be resolved peacefully through dialogue. India too supports dialogue as the way to resolve the issue with Pakistan but maintains that the talks and terrorism cannot go together.

For its part, Pakistan supported active participation of China at the platform of the South Asian Association for Regional Cooperation (SAARC). Also significantly, China tacitly expressed its backing for Pakistan's efforts to secure the NSG membership. China has been blocking India's entry into the NSG on the ground that New Delhi is not a signatory to the Nuclear Non-Proliferation Treaty (NPT) even though majority of the 48-member group supported India's entry into the elite nuclear club. Pakistan too has applied for the NSG membership.

"The two sides reaffirmed their commitment to multilateral, non-discriminatory arms control and non-proliferation endeavours," the joint statement said. "They noted with concern the continued pursuit of double standards in the application of non-proliferation norms and procedures and called for policies upholding rule of law and long-standing rules," it added.

China appreciates and supports steps taken by Pakistan for strengthening the global non-proliferation regime, it said.

In this context, China supports Pakistan's engagement with the Nuclear Suppliers Group and welcomes its adherence of NSG Guidelines, the statement added.

China also heaped praise on Pakistan for its efforts to counter terrorism and said it recognised Islamabad's efforts in actively strengthening financial regulations to combat terrorism financing, and called on all relevant parties to view Pakistan's counter-terrorism efforts in an objective and fair manner, according to the joint statement. But at the same time China is pressing Pakistan to crackdown on Uygur Islamic militants crossing in and out of the volatile Muslim-majority Xinjiang province bordering Pakistan-occupied Kashmir.

"The Pakistani side reaffirmed its support to the Chinese side in safeguarding its sovereignty and security, and combating separatism, terrorism and extremism including East Turkistan Islamic Movement (ETIM)," the statement said. China blames the separatist ETIM, an al-Qaeda linked group, for the violent attacks in Xinjiang and elsewhere in the country.

They agreed to further enhance defence cooperation, maintain high-level visits and exchanges at various levels between relevant departments of the two armed forces, the joint statement said. Both sides have agreed to make full use of the China-Pakistan Defence and Security Consultation mechanism, deepen cooperation in areas such as military exercises, training cooperation, personnel exchanges, and equipment and technology cooperation, it said.

During his visit, Prime Minister Khan has held talks with President Xi and Premier Li mainly focussing on seeking China's loans to tide over serious financial crisis faced by Pakistan. China while stating that it would extend necessary support to Pakistan reportedly committed USD six billion funding but did not so far officially confirmed it.