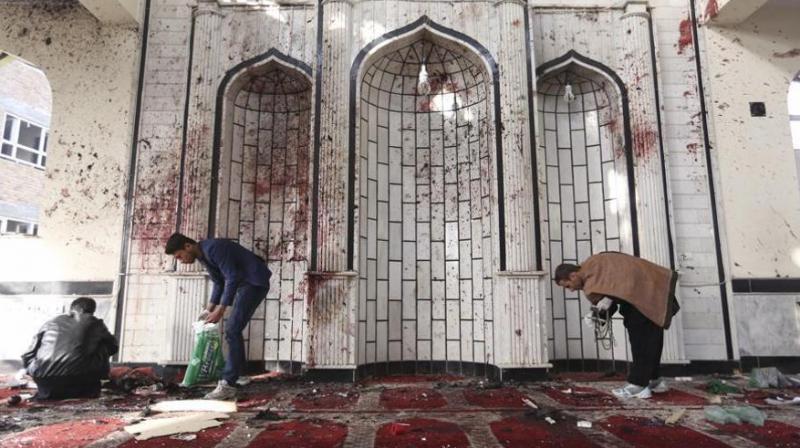 'We have 20 people killed and around 50 others were wounded,' General Raz Mohammad Mandozai, provincial police chief of Paktia province, near the Pakistan border, told AFP. (Photo: AP | Representational)

Khost: Twin suicide blasts struck a Shiite mosque in eastern Afghanistan on Friday as it was crowded with worshippers for weekly prayers, killing at least 20 people and wounding dozens in the latest attack on the minority. Officials have said they fear the death toll could rise after the assault, the latest targeting civilians who have borne the brunt of the violence in Afghanistan's long conflict.

It comes as urban areas across Afghanistan have been rocked by an increasing number of attacks in recent months, with both Islamic State (IS) and Taliban insurgents targeting security forces and government installations. The Taliban has not claimed a major attack in a city for weeks as it comes under increased pressure to agree to peace talks with the Afghan government. But IS has carried out multiple attacks in the eastern city of Jalalabad and the capital Kabul in recent months, targeting everything from government ministries to a midwife training centre.

Last month an IS suicide bomber blew himself up near Kabul international airport, killing 23 people including AFP driver Mohammad Akhtar. The uptick in violence comes as US and Afghan forces intensify ground and air offensives against IS, and the Taliban step up their turf war with the group.

Earlier this week more than 150 IS fighters surrendered in northern Afghanistan -- in a move that Afghan security forces and the Taliban hailed as the end of the extremist group in the north of the country.

Afghan civilians have taken the brunt of the gruesome war that began after the 2001 US-led invasion uprooted the Taliban regime. Insurgent attacks and suicide bombs were the leading causes of civilian deaths in the first half of 2018, a recent UN report showed.

A total of 1,692 civilians were killed, the highest number for the period since the United Nations Assistance Mission in Afghanistan began keeping records in 2009. Another 3,430 people were wounded, the report added.