The military has said that the boys trapped in the cave would get four months' food and learn to dive, as they wait for rescue. 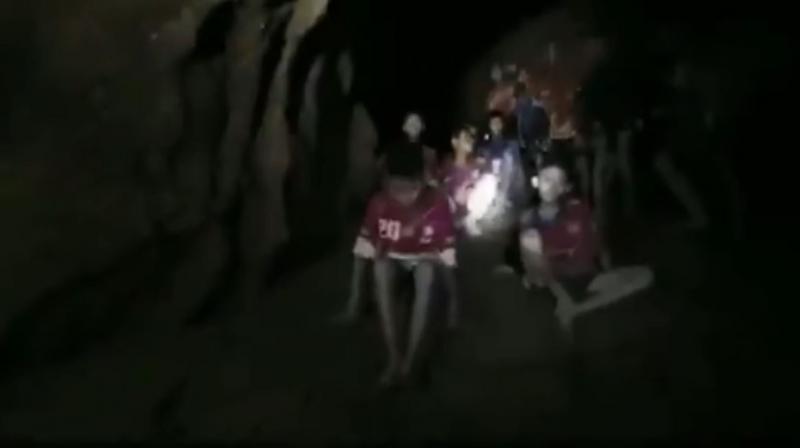 They appeared exhausted, rake thin, sensitive to the light but lucid, with some speaking faltering English to try to communicate with the unidentified diver. (Photo: Screengrab/AFP)

Mae Sai: Twelve boys and their football coach trapped in a flooded Thai cave for nine days were "found safe" late on Monday, in a miracle rescue after days of painstaking searching by divers.

There had been no contact with the boys, aged between 11 and 16, since they went missing with their coach, aged 25, last Saturday.

The massive rescue effort had been hampered by heavy rains that flooded the Tham Luang cave in northern Thailand, blocking access to chambers where it was hoped the group would be found alive.

Late on Monday, Chiang Rai provincial governor broke the news of their rescue, delighting a nation which has anxiously followed every twist and turn of the effort to save them.

"We found all 13 safe... we will take care of them until they can move," Narongsak Osottanakorn told reporters, who broke into spontaneous applause and cheering.

"We will bring food to them and a doctor who can dive. I am not sure they can eat as they have not eaten for a while."

They had hoped to find the "Wild Boar" team on an elevated ledge dubbed "Pattaya beach". But the boys had retreated 300-400 metres further as the ledge was submerged, governor Narongsak said.

Early on Tuesday morning, footage of their discovery was released on the official Facebook page of the Thai Navy SEALS.

In the video, the emaciated and bedraggled Thai youth football team can be seen crammed onto a wedge of dry ground surrounded by water deep inside a cave.

The group, mostly seated and with baggy football shirts pulled over their knees and illuminated by torchlight, asked for food and to leave the cave immediately.

They appeared exhausted, rake thin, sensitive to the light but lucid, with some speaking faltering English to try to communicate with the unidentified diver.

In the video an unidentified diver, speaking with a British accent, urges the group to stay calm and says "many, many people are coming... we are the first".

A voice confirms there all 13 people who went missing last Saturday are on the slope of land.

One child asks "what day?" and another says "we are hungry.. shall we go outside?"

The diver replies "I know, I understand... no, not today.

"You have been here for 10 days, you are very strong."

A rake thin child in the foreground appears to bow in gratitude and says "thank you" as his voice falters.

Divers had taken advantage of a brief window of good weather on Monday to edge further into the cave, with the water levels dropping slowly but steadily every hour thanks to round-the-clock pumping.

The team's travails however, are not over with a complex operation predicted to try to free the ailing group from the cave -- which is still partially submerged.

Friends and teachers of the "Wild Boar" football team refused to give up hope of seeing the young players again. Tilek Jana said he was eagerly awaiting his friend Prajak's return.

"Let him come and let's play (football) together, I miss him," he told AFP.

Scores of divers -- including foreign experts -- have been sent into the cave with hundreds of oxygen tanks, establishing a base camp inside the chambers over the weekend. Weary relatives have camped out at the cave's entrance for more than a week, desperately waiting for news of the boys, while the head of the Buddhist clergy has urged prayers from a nation fixated on the fate of the group.

The football team went into the cave on June 23 after a training session and became stranded when heavy rains cut them off from the entrance. Rescuers found their bicycles, football boots and backpacks near the cave's entrance and discovered handprints and footprints further in.

At 10 kilometres long, Tham Luang cave is one of Thailand's longest and one of the toughest to navigate, with its snaking chambers and narrow passageways. A sign outside the site warns visitors not to enter the cave during the rainy season between July and November.

Watch the video released by the Royal Thai Navy of the moments following their discovery: