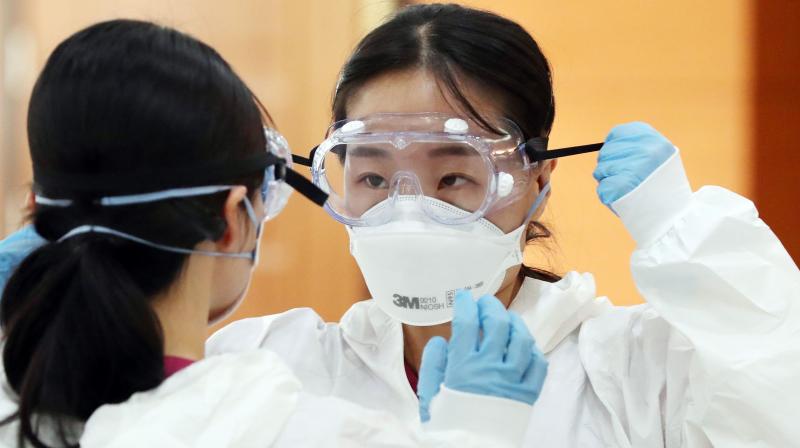 New nurse officers are trained on the COVID-19 coronavirus before heading to Daegu to help medical staff, at the Korea Armed Forces Nursing Academy in Daejeon, South Korea. AFP Photo

South Korea has seen a rapid rise in infections in recent days as authorities carry out checks on more than 260,000 people associated with the Shincheonji Church of Jesus, a religious group often condemned as a cult that is linked to more than half the cases.

Scores of events -- from K-pop concerts to sports seasons -- have been cancelled or postponed over the contagion, with school and kindergarten breaks extended by three weeks nationwide.

The central bank has warned of negative growth in the first quarter for the world's 12th-largest economy, noting the epidemic will hit both consumption and exports.

A 61-year-old female Shincheonji member developed a fever on February 10 but attended at least four services in Daegu -- the country's fourth-largest city with a population of 2.5 million and the centre of the outbreak -- before being diagnosed.

Lee Man-hee, the 88-year-old founder of the secretive sect, apologised for the outbreak on Monday -- twice bowing his head to the ground at a televised press conference -- insisting his entity was cooperating with the government's containment efforts.

Seoul city authorities have filed a complaint with prosecutors seeking to have him and other Shincheonji leaders charged with murder and other offences.

Of the 4,812 cases nationwide, nearly 90 percent were in Daegu and the neighbouring province of North Gyeongsang, the KCDC said.

The South has so far carried out more than 125,000 coronavirus tests on possible carriers and the figures are expected to rise further.