The opposition had planned to call for vote on whether to impeach Park over snowballing scandal involving shadowy longtime confidante. 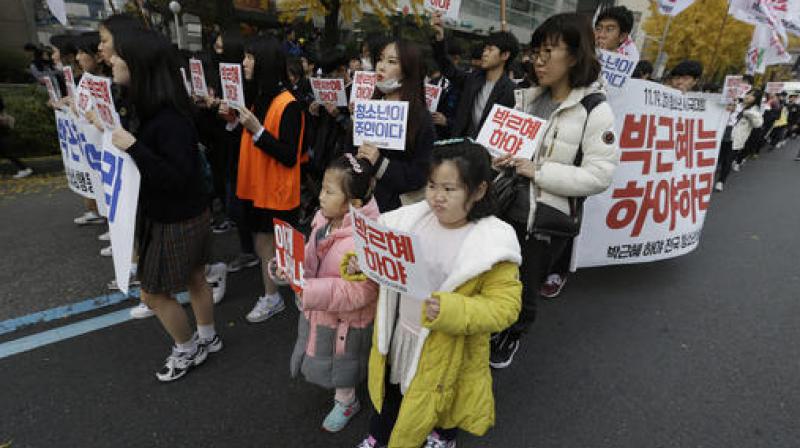 The opposition had earlier planned to call for a vote this week on whether to impeach Park over a snowballing scandal involving a shadowy longtime confidante. But they later squabbled over when to do so after Park made a conditional offer to resign.

Leaders of the three major opposition parties met and agreed to put an impeachment motion to a floor vote next Friday, according to a statement from the largest opposition Democratic Party.

"From now on, there won't be any cracks among the three opposition parties" over Park's impeachment, the statement said.

The opposition lacks enough lawmakers to pass Park's impeachment on its own and needs help from dissenters in Park's ruling party.

A group of anti-Park lawmakers in the ruling party decided Friday to vote for her impeachment if she fails to announce by next Wednesday that she will step down voluntarily in April, according to the office of Hwang Young-cheul, one of the dissenters. They also want her to promise to help ensure a smooth power transfer to her successor, Hwang's office said.

It was unclear how Park will react to the demands. She said Tuesday she would leave office if parliament comes up with a stable power transfer plan. Opposition lawmakers immediately lambasted the overture, saying it was a ploy to buy time and find ways to survive the scandal.

The scandal, which has sparked massive street protests and plunged Park's approval rating to 4 percent, is centered around allegations that Park let her friend of 40 years, Choi Soon-sil, manipulate government affairs from the shadows and extort money from businesses. Choi, who has never had a government job, is a daughter of a late cult leader who served as Park's mentor.

Prosecutors have indicted Choi and two of Park's former aides and accused Park of colluding in their criminal activities. Park denies the allegations, although she has acknowledged she received help from Choi in editing speeches and unspecified "public relations" issues.

Park's single five-year term ends in early 2018. If impeached, she will be stripped of her presidential powers until the Constitutional Court rules on her fate within 180 days.