Mulk’s name was announced at a joint presser by PM Abbasi and Opposition Leader Khurshid Shah on May 28. 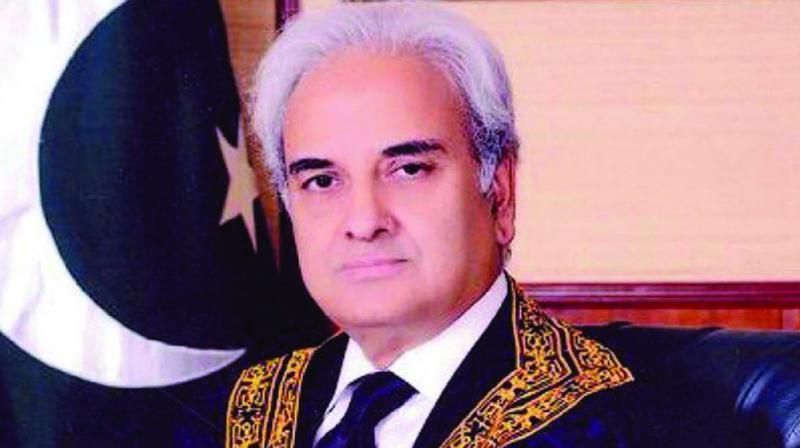 President Mamnoon Hussain administered the oath to Nasirul Mulk amid presence of higher government officials including outgoing Prime Minister Shahid Khaqan Abbasi. He was also presented Guard of Honor at the end of the ceremony.

Later, speaking to reporters, Nasirul Mulk —a former Chief Justice — said that the general polls will be conducted on time at any cost. He also announced to minimise the membership of Cabinet.

Mr Mulk’s name was announced at a joint presser by PM Abbasi and Opposition Leader Khurshid Shah on May 28. Speaker National Assembly Ayaz Sadiq was also present along with some ministers.

Justice Mulk was born on August 17, 1950 in Mingora, Swat. He completed his degree of Bar-at-Law from Inner Temple London and was called to the Bar in 1977.

He is remembered for the way he conducted a contempt case against then Prime Minister Yousuf Raza Gilani. He convicted the then chief executive for 30 seconds while maintaining the dignity and honour of the court, and left the disqualification issue open to the Election Commission of Pakistan and the then speaker of the National Assembly, Dr Fehmida Mirza.

Justice Mulk is one of the seven judges who signed a restraining order on November 3, 2007, when former military ruler Pervez Musharraf imposed emergency and forcibly sent the judges home. He has served as a judge in Peshawar High Court, Chief Justice of Pakistan and Chief Election Commissioner too.