He created an 'electoral list' and aptly called it 'Love and Loyalty', composing a poem for Assouz, a pseudonym for his fiancée. 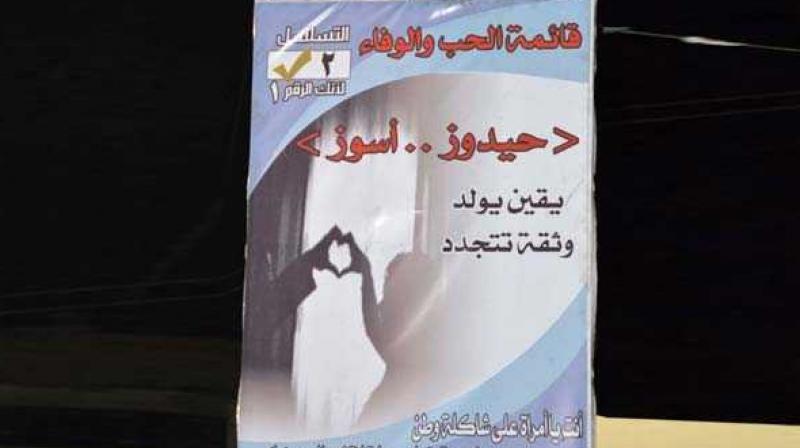 Brokenhearted Haidouz found unexpected inspiration in the plethora of campaign posters hung across the city in the lead up to local and parliamentary elections on May 12. (Photo: AFP)

Baghdad: Taking advantage of nationwide elections, one Iraqi man has emptied his pockets to panel Baghdad with posters to campaign for love and win back his ex-fiancee.

"I've loved this woman for two years. We were engaged and planned on getting married... but before the wedding, people claimed that I had cheated on her," said Haidouz, using a pseudonym.

"We argued and the issue grew when her family got involved, and our relationship fell apart."

Brokenhearted, Haidouz found unexpected inspiration in the plethora of campaign posters hung across the city in the lead up to local and parliamentary elections on May 12.

"I had the idea to take advantage of it. Not to run for election, but only to declare my love," the 32-year-old electrical engineer said.

He created an "electoral list" and aptly called it "Love and Loyalty", composing a poem for Assouz, a pseudonym for his fiancée.

"You are not only a woman, you are my homeland," he wrote.

As for the "candidates" on his newly created list, Haidouz is number two and his fiancée is number one.

Haidouz drained his savings of USD 1,700 (1,400 euros) and even borrowed from friends to carry out his campaign to win back "Assouz".

With the help of a friend, he spent three nights erecting 65 campaign posters across his fiancée’s neighbourhood and along the main roads of the capital.

But it all seems to have been in vain.

Passersby asked him if the posters were for a new TV drama set to air during the holy Muslim month of Ramadan -- prime time for television viewers in the Arab world -- which begins in mid-May this year.

Assouz's family tore down the posters in their neighbourhood, while the love of his life never contacted him and one of her brothers have demanded that he take the rest down.

Heartbroken two-times over now, Haidouz still hasn't given up.

"I haven't lost hope. I'm still waiting for her answer."