The pre-dawn assault, claimed by the Taliban, saw militants enter the base in Helmand province. 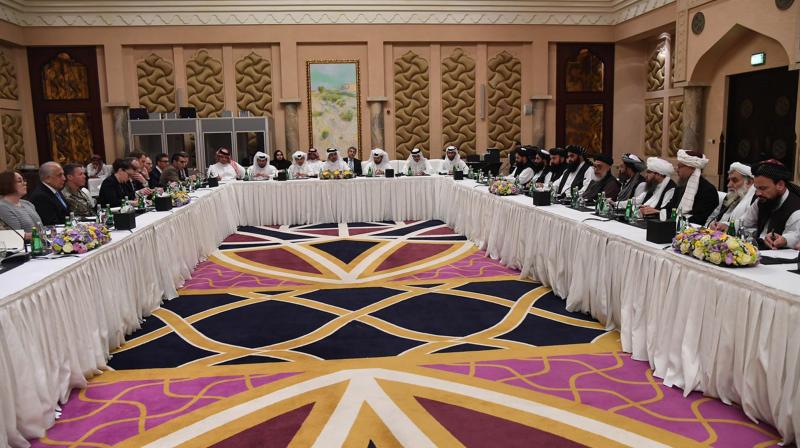 The Taliban control or contest more than half of Helmand's districts and regularly deliver sharp blows to Afghan forces. (Photo:AP)

Kabul: At least 23 Afghan security forces were killed in a Taliban attack on a joint US-Afghan base in southwestern Afghanistan, officials said Friday, as fighting continued during a pause in peace talks between the insurgents and American negotiators.

Details of the heavy toll from the hours-long assault on Shorab military base -- one of the largest military installations in the country -- followed earlier claims by local and US officials that Afghan forces had successfully repelled the attack, killing four militants.

The pre-dawn assault, claimed by the Taliban, saw militants enter the base in Helmand province and engage in firefights with Afghan forces.

Hours later, Ghafoor Ahmad Jawed, a spokesman with the Ministry of Defence, said: "The operation is over -- 23 security forces killed, 15 injured and 20 insurgents killed."

Omar Zwak -- a spokesman for the provincial governor -- also confirmed the toll, saying the Taliban deployed at least seven suicide bombers who were killed during the fighting.

A US official told AFP that no Americans were killed or wounded in the attack.

The Taliban control or contest more than half of Helmand's districts and regularly deliver sharp blows to Afghan forces, who have been struggling to hold off insurgents across the war-torn country since taking the lead from NATO forces in late 2014.

The assault on Shorab comes as US and Taliban negotiators in Doha have temporarily halted peace talks, which are set to restart over the weekend.

US special envoy Zalmay Khalilzad earlier this week called the latest meetings in the months-long diplomatic push "productive", saying the two sides "will take the next two days for internal deliberations, with plans to regroup on Saturday".

Negotiations are believed to be progressing after high-level talks last month ended with a "draft framework" on the potential withdrawal of US troops and a pact to prevent Afghanistan from harbouring terrorists.A New York Times report published Thursday hinted that US forces could leave Afghanistan within five years under a Pentagon plan offered as part of a potential deal with the Taliban to end the nearly 18-year war.

The US has also pushed for a ceasefire and the opening of a dialogue between the Taliban and the Kabul government -- demands that have been repeatedly rejected by the insurgents.

The Taliban were quick to dismiss the existence of the plan, saying they were unaware of any such proposals made during the negotiations.

"No talks have been held in the meetings regarding an interim government and elections, nor has the US side proposed anything regarding staying in Afghanistan for four or five more years," the insurgents said in a statement Friday.

The Afghan government and civil society groups have voiced repeated concerns that an abrupt US withdrawal could spark an even bloodier civil war or a return to hardline Taliban rule.

Heavy snowfall across large swathes of Afghanistan has led to a sharp reduction in violence this winter, but warmer weather in the country's south will likely spark an increase in bloodshed with the arrival of the spring fighting season.

Analysts have warned that the Taliban are likely to ramp up attacks in the coming months as they seek to maintain momentum on the battlefield and leverage at the negotiating table.

Afghan forces, however, claim to be taking the fight to the insurgents, with the Ministry of Defence saying more than 100 "terrorists" have been killed in recent days in various operations across the country.

The US has also intensified its air campaign against the Taliban and the Islamic State group, dropping twice as many munitions on insurgent positions in 2018 compared to the previous year.