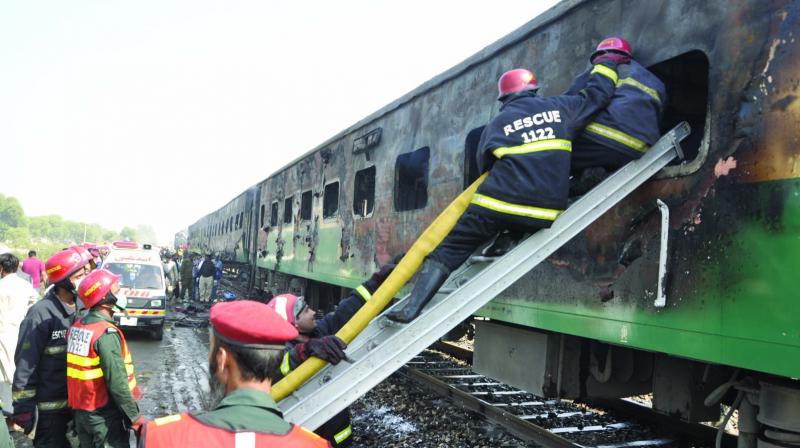 Rescue workers look for survivors following a train damaged by a fire in Liaquatpur area of Rahim Yar Khan district in Pakistan on Thursday. (Photo: AP)

Islamabad: At least 74 passengers lost their lives and over 40 sustained critical burn wounds on Thursday when three carriages of a Tezgam Express caught fire due to explosion in gas canisters purportedly used by Tableeghi Jamaat (preaching party) passengers to cook breakfast near Talwari Station in Liaquatpur area of Pakistan’s Rahim Yar Khan city. The train was bound from Karachi to Rawalpindi.

Television footage showed flames pouring out of the carriages as people could be heard crying in the incident. Many commuters died and several were injured when they jumped from the moving train to escape the flames.

Emergency was declared in all hospitals of the district. The wounded were rushed to hospitals in the nearby city of Bahawalpur and elsewhere in Rahim Yar Khan district.

At least 12 of the injured persons are in critical condition, whereas 18 dead bodies could not have been identified. Women and children were also amongst the victims. Many of the dead and injured were shifted to the District Headquarters Hospital in Liaqatpur.

Pakistan Railways has stated that people can contact them at helpline number (03008060780) for any required information. PR-Karachi Division has given a helpline number 02199213506 for families of the passengers to contact an emergency center established at Karachi Railway Station.

Fire fighters and Rescue 1122 teams extinguished the fire and evacuated other passengers from the train to safe places. The affected carriages were separated from the train. A cooling and search operation was underway under the supervision of Rahim Yar Khan’s deputy commissioner.

Initial reports suggested that at least three carriages (No. 3, 4, 5) of the train caught fire immediately after the cylinder exploded in one carriage when preachers belonging to the Tableeghi Jamaat were cooking breakfast on a gas cylinder.

Eyewitnesses have refuted that the Tezgham Express train inferno this morning occurred due to gas canisters carried by passengers, while claiming that short circuiting might have caused the fire to break out as a burning smell could be felt in the Bogie No. 12 since last night.

They claimed that they had informed authorities about the burning smell but no action was taken, and they have saved their lives by jumping of the train.

According to police, 207 commuters were travelling in the three bogies with 77, 76 and 54 in each of them. Most of the passengers began their journey from Hyderabad.

Yasmin Rashid, a provincial minister in the Punjab, told reporters that the medical staff were providing the best possible treatment for the injured at a hospital in Liaquatpur.

Those critically injured will be taken ambulances to the city of Multan, the largest city nearest to the site of the accident.

Earlier, Federal Minister for Railways Sheikh Rashid Ahmed said that rescue operation was underway and the track would be opened after two hours.

“Two cooking stoves blew up. They were cooking, they had (cooking) oil which added fuel to fire,” he said. “Most deaths occurred from people jumping off the train,” he added. Baqir Husain, the head of the district rescue service, said the death toll could rise, and 16 people had been injured.

“People usually sneak stoves onto trains in order to prepare meals on long journeys and it is a common problem,” the minister said. “Safety regulations are often ignored in the overcrowded trains.”

In a condolence message, Prime Minister Imran Khan has expressed deep sorrow with the grief-stricken families and directed authorities to provide best possible medical care to the injured persons. The premier has also ordered an immediate inquiry into the incident that has shocked the entire country.

PM Khan stated he was "deeply saddened by the terrible tragedy of the Tezgam train". "My condolences go to the victims’ families and prayers for the speedy recovery of the injured. I have ordered an immediate inquiry to be completed on an urgent basis," he said via Twitter.