The attack was the latest in a relentless string of large-scale bombings and assaults in the capital and elsewhere in Afghanistan this year. 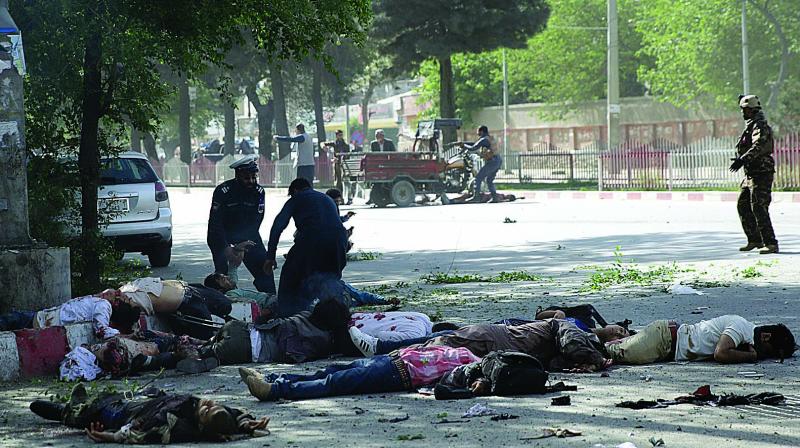 Victims in double explosions lie on the ground in Kabul, Afghanistan, on Monday. (Photo: AP)

Kabul: Two Islamic State suicide bombers struck in Afghanistan’s capital on Monday, killing 25 people, including nine journalists who had rushed to the scene of the first attack, in the deadliest assault on reporters since the fall of the Taliban in 2001.

An Agence France-Presse photographer, a cameraman for the local Tolo TV station and several reporters for the Afghan branch of Radio Free Europe were among the fatalities, police said. At least 45 people were wounded in the attacks, according to Kabul police spokesman Hashmat Stanekzai, who said four police were among those killed.

The attack was the latest in a relentless string of large-scale bombings and assaults in the capital and elsewhere in Afghanistan this year.

A few hours later, in the southern Kandahar province, a suicide car bomb targeting a Nato convoy killed 11 children from a nearby religious school, police said.

The children had gathered around the Nato convoy for fun when the bomber struck, said Abdul Rahim Ayubi, a lawmaker from Kandahar. Eight Romanian Nato soldiers were wounded.

The ISIS group claimed the Kabul bombings in a statement posted online, saying it targeted the Afghan intelligence headquarters.

The statement did not say anything about specifically targeting journalists.

The blasts took place in the central Shash Darak area, home to Nato headquarters and a number of embassies and foreign offices — as well as the Afghan intelligence service.

Mr Stanekzai said the first suicide bomber was on a motorbike, while the second targeted those scrambling to the scene to aid victims.

He said the second attacker was on foot in a crowd of reporters, pretending to be a member of the press, when he set off his payload.