At the click of a mouse, customers can hire a monk from Minrevi from 35,000 yen($300) depending on the ceremony. 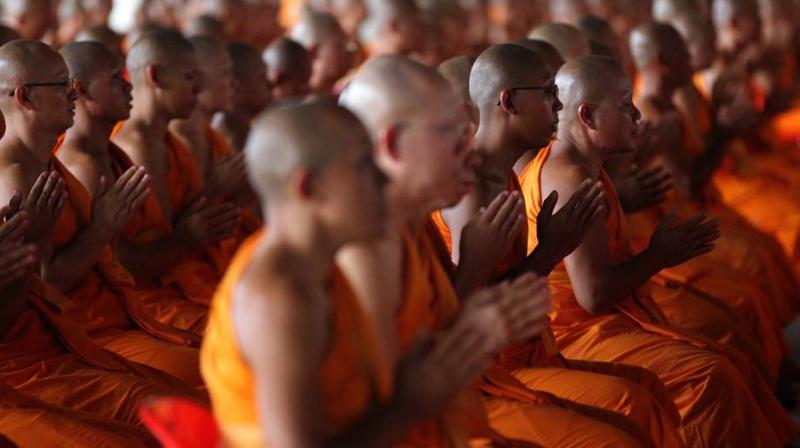 Watanabe's employer, Tokyo-based firm Minrevi, said demand for its monk delivery service has spiked since it started in May 2013, as more and more Japanese lose their ties to local temples -- and lose faith in an opaque donation system. (Representational Image)

Funabashi, Japan: In a quiet room thick with the smell of incense, Buddhist monk Kaichi Watanabe chants sutras to commemorate the one-year anniversary of a woman's death.

The 41-year-old may look like a traditional holy man in Japan -- but he wasn't dispatched by a temple. Instead, the family ordered him through a fast-growing rent-a-monk business that has angered traditionalists who warn it is commercialising the religion.

Watanabe's employer, Tokyo-based firm Minrevi, said demand for its monk delivery service has spiked since it started in May 2013, as more and more Japanese lose their ties to local temples -- and lose faith in an opaque donation system.

The monk later rings a small traditional bell and bows to relatives as the 30-minute ceremony winds down at the grieving family's home near Tokyo.

"There are many temples in the neighbourhood, but I didn't know where to call," said the deceased woman's middle-aged son, who asked not to be named.

"Also, I have no idea how much I should donate. But this has a clear pricing system."

At the click of a mouse, customers can hire a monk from Minrevi from 35,000 yen($300) depending on the ceremony.

Retailing giant Aeon sent shockwaves through Buddhist circles in 2010 when it started a service that had a price list for introducing customers to temples for funeral services.

The open pricing flew in the face of longstanding system in which monks collect donations, known as ofuse, in return for performing ceremonies.

But there has been growing unease about the murky system which leaves the amount up to families, who have to make several more donations after a funeral for more than a decade.

Japan's Buddhist temples count on donations to do renovations, which can cost several million dollars, but there has been criticism that they're more interested in raising revenue than offering spiritual guidance.

"That ignores the spirit of donations," Iwagumi said, noting that monks are not supposed to expect financial rewards for performing their duties.

Aeon's fledgling operation outraged the federation, which demanded it take down the price list. The company complied but still runs its service.

"They have commodified donations. This is extremely unfortunate," Iwagami said.

But Minrevi's vice-president Masashi Akita brushed off the criticism, saying the company is just offering a "platform" to connect customers with monks.

The firm has a roster of about 700 monks nationwide with business on track to grow by 20 percent this year, he added.

Akita, who grew up in rural community where his neighbours regularly visited a temple, said the business is just a sign of the times.

"I was shocked when I first learned that some people didn't know how to contact a monk," he said.

"So I wanted to be that bridge."

The Japanese government does not keep track of the religious identification of citizens, but participation in rituals related to both Buddhism as well as native Shintoism -- the two major religions in the country -- is common across the nation.

But attachment to religion has fallen into decline.

As the population rapidly ages and small rural communities shrink, some 30 percent of Japan's 75,000 Buddhist temples are at risk of closing by 2040, said Kenji Ishii, a professor of religion at Kokugakuin University in Tokyo.

"Japanese have maintained ties with temples because of funerals and other types of commmunity-related events, not for religious reasons," he added.

"Buddhist leaders now have to think how they're going to run their sects with shrinking revenues. But it seems like they don't want to look at the reality."

Watanabe, who conducted the service near Tokyo, doesn't see a clash between the business and spiritual aspects of his job.

"I want to spread the teachings of Buddhism," he said.

"This service gives us more opportunity to visit homes. I think it's meaningless if we cannot be there to help."