Vishnu Viswanath, 29, and Meenakshi Moorthy, 30 fell to their deaths from Taft Point in the national park in California. 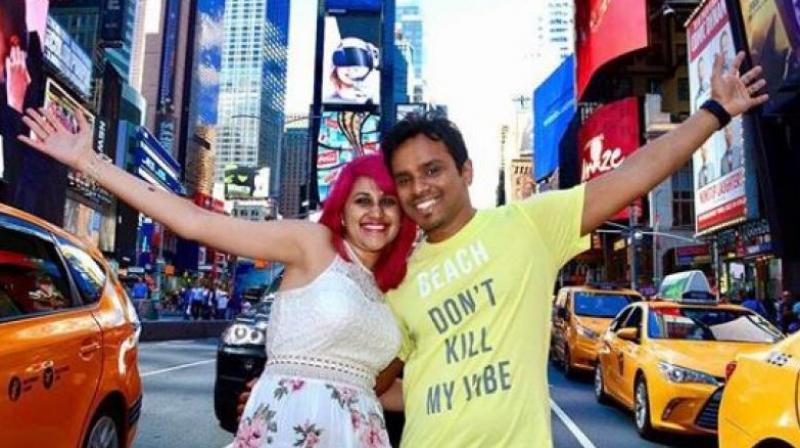 The couple, who through their social media posts chronicled their travelling adventures, also wrote a blog called 'Holidays and HappilyEverAfters'. (Photo: Instagram/holidaysandhappilyeverafters)

New York: An Indian couple who died after falling 800 feet in an area with steep terrain in California's Yosemite National Park last week were apparently taking a selfie before the tragedy occurred, a media report said.

Vishnu Viswanath, 29, and Meenakshi Moorthy, 30 fell to their deaths from Taft Point in the national park in California.

They were identified Monday as the married couple from India living in the United States.

A report in Fox News cited Viswanath's brother Jishnu Viswanath as saying that they were apparently taking a selfie. The popular viewpoint in the California park does not have a railing to protect visitors from the ledge.

He added that Moorthy had set up the tripod by the ledge possibly to take a selfie. Rangers had arrived at the scene Thursday and "used high-powered binoculars to find them and used helicopters to airlift the bodies.”

The couple, who through their social media posts chronicled their travelling adventures, also wrote a blog called 'Holidays and HappilyEverAfters'.

Just months before her tragic death, Moorthy had warned in an Instagram post the dangers of taking photographs on the edge of cliffs and atop skyscrapers. She posted a picture of herself at the Grand Canyon, saying in the caption that "A lot of us including yours truly is a fan of daredevilry attempts of standing at the edge of cliffs. But did you know that wind gusts can be fatal? Is our life worth one photo?”

In an eerie coincidence, Moorthy appears in the selfie of another tourist couple at Taft Point, just minutes before she plummeted to her death. After reports of the couple's death emerged and their identities were revealed, Sean Matteson said that Moorthy appears in two of their selfie photos that they took at the popular tourist destination.

Matteson said Moorthy's pink-haired visage appears in the corner of two photos he snapped of himself and his girlfriend Drea Rose Laguillo. He said the woman made him a little nervous because he felt she was standing too close to the edge. But he said she appeared comfortable. Park spokesman Jamie Richards was earlier quoted as saying that "We still do not know what caused them to fall. We're trying to understand what happened. We may never know, (but) from everything we see, this was a tragic fall."

Richards said that so far 10 people have died in the park this year, and six of those park visitors fell to their deaths.

In May, Asish Penugonda, a 29-year-old Indian national, fell to his death while ascending the park's famous Half Dome trail. "Yosemite is a wild and scenic place. If you are not paying attention to your footing, it is very easy to have a slip and fall," Richards said.

"Now, we don't know what happened in this case, but we urge hikers to stay on the trail." Investigators were looking into how the couple fell or what had occurred when the accident happened at the famous spot which is a favourite place for tourists from around the world to take scenic and memorable photos.

The couple had been married since 2014 and both were software engineers. On the cover of Viswanath's Facebook page is a picture of the two of them smiling on the edge of a cliff at the Grand Canyon. In a Facebook post, College of Engineering, Chengannur said the two were its alumni and added that it deeply mourns their "accidental demise".

The college said Viswanath and Moorthy belonged to the BTech 2006-10 Computer Science and Engineering batch.

"Our hearts go to the friends and family members of this lovely couple. May their souls rest in peace,” the college said.

Raj Katta, 24, of New York, said he got to know both of them while attending Bradley University, in Illinois. He said Viswanath was a "thoughtful and amazing guy, very talented. They are a really happy couple. Very positive."

Katta described Moorthy as extremely positive and enthusiastic. "She's one of those girls who wants to explore the world and discover a deeper meaning in life."

He said that Viswanath and Moorthy had decided six months ago that he would take the job at Cisco and they would live in California for a year or so.