10 killed as protest against elections turned violent in Venezuela

Prosecutors said 10 people were killed in violence around the vote, bringing the death toll in four months of protests to some 120 people. 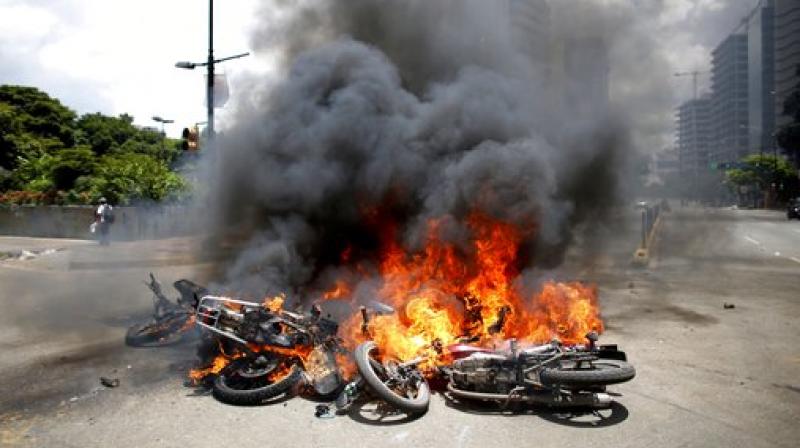 Venezuelan Bolivarian National police move away from the flames after an explosion at Altamira square during clashes against anti-government demonstrators in Caracas, Venezuela. The explosion injured several officers and damaged several of their motorcycles. The officers were then seen throwing several privately owned motorcycles into the remaining fire in reprisal. (Photo: AP)

Carascas: A wave of bloodshed swept Venezuela on Sunday as troops cracked down on violent protests against elections to choose the members of a powerful assembly that President Nicolas Maduro has tasked with writing a new constitution.

Protesters attacked polling stations and barricaded streets around the country, drawing a bloody response from security forces, who opened fire with live ammunition in some cases.

At least 10 people were killed, prompting the United States to threaten further “strong and swift” sanctions on Maduro’s government.

Senior opposition leader Henrique Capriles called on Venezuelans to continue defying the deeply unpopular Maduro with new protests against the election and the “massacre” he said accompanied it.

“We do not recognize this fraudulent process,” he said at the close of voting, calling for nationwide marches Monday and a mass protest in Caracas Wednesday, the day the new “Constituent Assembly” is due to be installed.

Maduro has decreed a ban on protests during and after the vote, threatening prison terms of up to 10 years.

The socialist president is gambling his four-year rule on the 545-member assembly, which will be empowered to dissolve the opposition-controlled congress and rewrite the constitution.

But the unrest fueled fears that his insistence on convening the assembly despite months of demonstrations and fierce international criticism would only plunge the country deeper into chaos.

Ten dead: Prosecutors said 10 people were killed in violence around the vote, bringing the death toll in four months of protests to some 120 people.

Those killed included a candidate for the new assembly, a regional opposition leader, two teenage protesters and a soldier in the western state of Tachira, which saw some of the worst violence.

In eastern Caracas, seven police were wounded when an improvised explosive targeted their motorcycle convoy.

Soldiers also violently moved against protesters in the second city of Maracaibo, in the west, and Puerto Ordaz in the east.

The opposition had called for a boycott and mass demonstrations against the election, which it condemned as a bid to install a dictatorship.

“This constituent assembly is being born in a bloodbath. It is born illegitimate,” said Nicmer Evans, a prominent socialist turned Maduro critic, alleging widespread irregularities.

“I’m the first voter in the country. I ask God for his blessings so the people can freely exercise their democratic right to vote,” he said. He was accompanied by his wife, Cilia Flores, a candidate for the new assembly.

He got a technological snub when he scanned his ID card at the polling station and the screen spit out the words, “This person does not exist or the ID was canceled.”

Maduro, whose term is meant to end in 2019, describes the election as the most important in Venezuelan history.

“I have come to vote to tell the gringos and the opposition that we want peace, not war, and that we support Maduro,” said voter Ana Contreras. Turnout will be key to determining the legitimacy of the election.

But that will be difficult to ascertain, as most voters will be able to vote twice: once by region and once by social or industrial sector.

According to polling firm Datanalisis, more than 70 percent of Venezuelans oppose the idea of the new assembly and 80 percent reject Maduro’s leadership.

“The people are not going to give up the streets until this awful government goes,” protester Carlos Zambrano, 54, said in western Caracas. Venezuelans also protested in Miami, Madrid and various Latin American cities.

The number of Venezuelans living abroad has soared as the once-booming oil producer has descended into a devastating economic crisis marked by shortages, runaway inflation, riots and looting.

US sanctions: Fear of the violence worsening has rippled across the region, and beyond.

The US, the EU, Canada and Latin American powers including Argentina, Brazil, Colombia and Mexico have condemned the election.

“Maduro’s sham election is another step toward dictatorship,” tweeted US envoy to the United Nations Nikki Haley.

Britain’s junior foreign minister Alan Duncan also described the vote as a “sham,” as did many experts.

“The vote means the end of any trace of democratic rule. Maduro’s blatant power grab removes any ambiguity about whether Venezuela is a democracy,” said Michael Shifter, head of the Inter-American Dialogue research center.

The US has ordered the families of its diplomats to leave after imposing sanctions on 13 current and former Venezuelan officials. It threatened further sanctions against Caracas.

“We will continue to take strong and swift actions against the architects of authoritarianism in Venezuela, including those who participate in the National Constituent Assembly as a result of today’s flawed election,” US State Department spokeswoman Heather Nauert said in a statement.