Deadliest day in US as virus toll crosses 3000 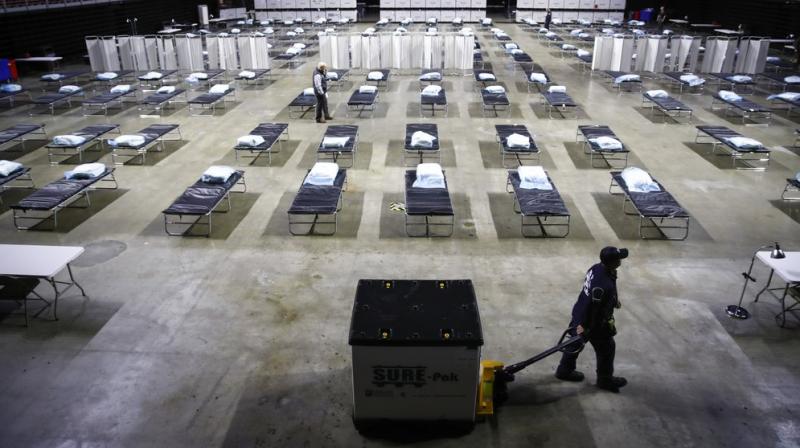 A naval hospital ship with a 1,000 bed-capacity, Monday, March 30, 2020, at Pier 90 in New York. The ship will be used to treat patients who do not have the new coronavirus as land-based hospitals fill up to capacity with those that do. (AP Photo)

NEW YORK: The U.S. death toll from the coronavirus pandemic climbed past 3,000 on Monday, the deadliest day yet in the country’s mounting crisis, while New York cheered the arrival of a gleaming 1,000-bed U.S. Navy hospital ship as a sign of hope in the city’s desperate fight.

In a grim new milestones marking the spread of the virus, total deaths across the United States hit 3,017, including at least 540 on Monday, and the reported cases climbed to more than 163,000, according to a Reuters tally.

People in New York and New Jersey lined both sides of the Hudson River to cheer the U.S Navy ship Comfort, a converted oil tanker painted white with giant red crosses, as it sailed past the Statue of Liberty accompanied by support ships and helicopters.

The Comfort will treat non-coronavirus patients, including those who require surgery and critical care, in an effort to free up other resources to fight the virus, the Navy said.

“It’s a wartime atmosphere and we all have to pull together,” said New York City Mayor Bill de Blasio, who was among the dignitaries to greet the ship’s arrival at the Midtown Manhattan pier.

Hospitals in the New York City area have been overrun with patients suffering from COVID-19, the respiratory illness caused by the virus. Officials have appealed for volunteer healthcare workers.

The United States has the most confirmed cases in the world, a number that is likely to soar when tests for the virus become more widespread.