Trump and Biden clashed over each other's personality, past record, family and their visions. 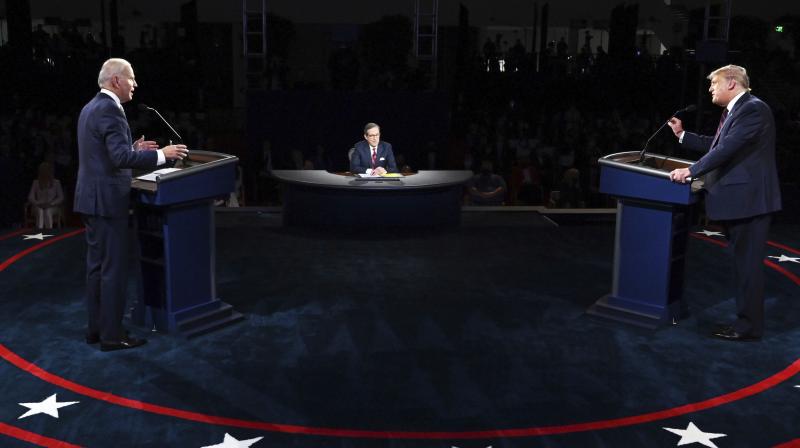 Washington: Democratic challenger Joe Biden on Wednesday termed President Donald Trump a "liar" and a "clown" as the pair clashed in a fiery start to their first presidential debate.

Trump fired back, telling Biden, "There's nothing smart about you, Joe. Forty-seven years, you've done nothing."

During the first of the three presidential debates in Cleveland, Ohio, Trump and Biden clashed over each other's personality, past record, family and their visions.

"The fact is that everything he's (Trump) saying so far is simply a lie. I'm not here to call out his lies. Everybody knows he's a liar," Biden said.

Responding to the jibe, Trump said Biden is a liar and graduated last in his class.

Attacking Trump over the handling of the coronavirus, Biden said the president has lied to Americans on the COVID-19 issue.

"He still hasn't even acknowledged that he knew this was happening, knew how dangerous it was going to be back in February, and he didn't even tell you. He is on record as saying it. He panicked or he just looked at the stock market, one of the two, because guess what, a lot of people die and lot more are going to die unless he gets a lot smarter, a lot quicker," he said. Trump hit back, saying, "Did you use the word 'smart'? So you said you went to Delaware State but you forgot the name of your college. You didn't go to Delaware State, you graduated either the lowest or almost the lowest in your class, don't ever use the word smart with me."

Biden replied, "Give me a break", to which Trump said, "There's nothing smart about you, Joe. Forty-seven years you have done nothing."

Biden alleged that Trump has "no plan" to fight the coronavirus pandemic.

The president has no plan. He hasn't laid out anything. He knew all of the way back in February how serious this crisis was. He knew it was a deadly disease. What did he do? He is on tape as acknowledging he knew it. He said he didn't tell us or give people warning because he didn't want to panic the American people, he said.

You don't panic, he panicked. In addition to that what did he do? He went in and he -- we were insisting that the Chinese -- the -- the people we had on the ground in China should be able to go to Wuhan and determine for themselves how dangerous this was. He did not even ask Xi (Jinping) to do that, Biden said.

As the two rivals clashed on medicate, the president said the Democrats were planning socialising of medicine.

In his reply, Biden said, What this clown is doing?"

Trump also rued that Biden was getting better press than him.

We've done a great job. The only thing I haven't done a good job -- and that's because of the fake news. No matter what you say to them they give you bad press on -- it's just fake news, he said.

"They give you good press. They give me bad press because that's the way it is, unfortunate -- but let me just tell you something. I don't care. I've gotten used to it. But I'll tell you, Joe, you could never have done the job that we did. You don't have it in your blood. You could have never done that job," Trump added.

The president asserted that he knows how to get a job done.

Biden also branded Trump "a fool", when the president was talking about the large crowd that he has been drawing in the election campaign.

He's been totally irresponsible the way in which he has handled the social distancing, the people wearing masks, basically encouraged them not to...And he's a fool on this, the former vice president said.

Hitting back, Trump said nobody shows up to Biden's rallies.

If you could get the crowds, you would have done the same thing. But you can't. Nobody cares, Joe, he said.