Local residents told AFP that one building at the school was condemned for safety reasons from the moment it opened. 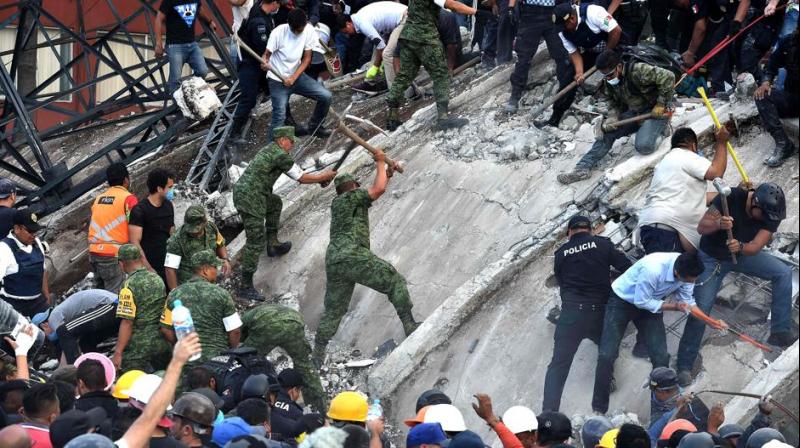 Rescuers, firefighters, policemen, soldiers and volunteers remove rubble and debris from a flattened building in search of survivors after a powerful quake in Mexico City (Photo: AFP)

Mexico City: Mexico is still cleaning up the rubble left by its killer earthquake on September 19, but already accusations are flying that shoddy construction, official negligence and corruption made the disaster worse.

The 7.1-magnitude earthquake killed more than 350 people and left gruesome scenes of destruction in the capital, such as a primary school where 19 children were crushed to death.

The mayor, education minister and top officials for the district have traded blame over the school's collapse, amid media reports that its principal had illegally built a swank apartment for herself on the roof of the building.

Claudia Sheinbaum, the top district official, pressed charges this week against the principal and two former officials accused of turning a blind eye to major construction irregularities at the school.

Local residents told AFP that one building at the school was condemned for safety reasons from the moment it opened. But the school never closed.

"We don't know if somebody paid a bribe, but the structure was never changed," said one resident, Francisco Fontana, a 30-year-old historian.

The school is not an isolated case.

Across the capital, 1,800 buildings suffered major damage during the quake, including at least seven that were brand new and should have conformed to strict earthquake-resistant building codes.

- 'On the street' -
"Thousands of people have been left out on the street because someone didn't adequately supervise construction or accepted money to look the other way," said Max Kaiser, head of anti-corruption programs at the Mexican Institute for Competitiveness.

Corruption is rarely punished in Mexico, and it can be hard to see, even when evidence indicates it is festering beneath the surface.

But the sight of modern-looking buildings collapsing like houses of cards lays bare the rot in the construction and building permit processes, said Mariana Campos of the public policy research center Mexico Evalua.

She mentioned the example of the deadliest collapse, that of a seven-story office building in the trendy Roma neighborhood where up to 60 people are feared dead.

"Looking at it, it didn't seem like a building that would collapse the next day. It was beautiful and well-maintained," she told AFP.

"But the (defect) wasn't visible. That's how corruption works."

Now, as the country enters the recovery phase, the risk is that it will fall in the same trap again.

There are already accusations of corruption in the relief effort. The governor of the hard-hit state of Morelos is accused of hoarding food aid to hand it out to his supporters.

- Into the void -
The quake caused some $2 billion in damage, together with an earlier one on September 7, according to the government.

Watchdog groups are already calling for an independent review of where the money goes.

Pena Nieto meanwhile wants the private sector to set up a committee that will coordinate with the government on how donated funds are spent.

"We don't think the federal government should administer private funds... but we want to help direct where they go," he said.

Mexicans are deeply mistrustful of their politicians.

But there are signs of progress amid the catastrophe.

After the deadliest earthquake in Mexico's history -- a 1985 tremor that struck on the same date as this one and killed more than 10,000 people -- the government was completely overwhelmed, leaving civilian volunteers to fill the void.

This time, the military, police and disaster management officials were on the scene from the first minutes and ran the emergency response.

Kaiser, the anti-corruption crusader, said there was a lesson to be learned.

"Institutions are not disposable, but useless politicians are," he said.