Democrats in Congress reacted with fury, describing the move as 'shameful' and accusing Trump of covering up Russian interference 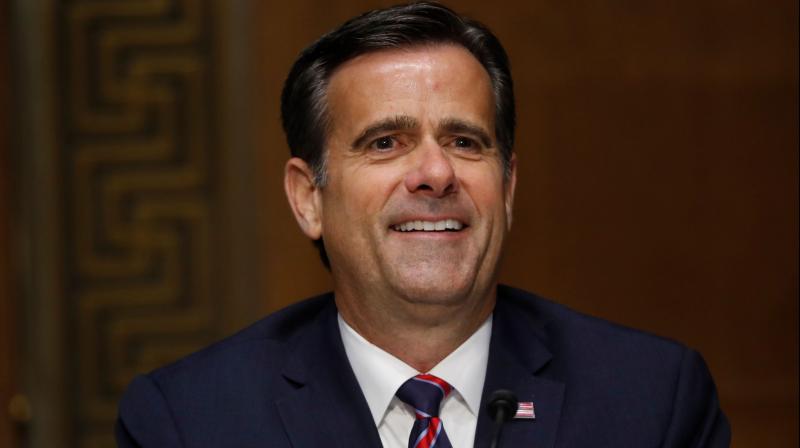 The top U.S. intelligence official, National Intelligence Director John Ratcliffe, told lawmakers that they would only be receiving written updates about election security to help ensure the information is not misunderstood nor politicized. (AFP)

Washington: The White House has revealed it is to end in-person briefings to congressional intelligence committees about foreign election interference, sparking accusations Saturday that it was covering up Russian help for President Donald Trump's reelection.

The move comes two months ahead of the general election, with Trump playing down the threat of foreign interference and accusing Democrats of leaking sensitive information.

He offered no evidence for the claim, which he has made several times during his presidency.

"No matter what or who it is about, including China, these deranged lowlifes like the Russia, Russia, Russia narrative. Plays better for them," he added.

Congress will still have access to classified written reports, but lawmakers will no longer be able to question officials from the Office of the Director of National Intelligence (ODNI) about what they learn.

Democrats in Congress reacted with fury, describing the move as "shameful" and accusing Trump of covering up Russian interference.

"As usual, President Trump is lying and projecting. Trump fired the last DNI for briefing Congress on Russian efforts to help his campaign," Schiff tweeted.

Schiff and House Speaker Nancy Pelosi called in a separate statement for the administration and intelligence community to resume the briefings.

"If they are unwilling to, we will consider the full range of tools available to the House to compel compliance," they said.

DNI John Ratcliffe wrote to the top lawmakers from both parties in the House and Senate intelligence committees explaining the change, in a letter dated August 28, which was circulated in US media Saturday.

"I believe this approach helps ensure, to the maximum extent possible, that the information ODNI provides the Congress in support of your oversight responsibilities on elections security, foreign malign influence, and election interference is not misunderstood nor politicized," he wrote.

"It will also better protect our sources and methods and most sensitive intelligence from additional unauthorized disclosures or misuse."

White House chief-of-staff Mark Meadows said during a visit with Trump to hurricane-hit Louisiana and Texas Saturday that "the last time they gave briefings, a few members went out and talked to the press, disclosed information that they shouldn't have disclosed."

But Senate Intelligence Vice Chairman Mark Warner called the decision to stop in-person briefings an "unprecedented attempt to politicize an issue -- protecting our democracy from foreign intervention -- that should be non-partisan."

Members of the US intelligence committee as well as former FBI chief Robert Mueller have said publicly that Moscow is reprising its 2016 campaign to help Trump win the election.

William Evanina, director of the National Counterintelligence and Security Center, warned earlier this month that China, Russia and Iran were all seeking to interfere, using online disinformation and other means.

The Republican-led Senate Intelligence Committee earlier in August released the most detailed report to date on Russian interference in 2016.

It accused the Trump campaign of welcoming Moscow's help, and set out new information on contacts between Russian intelligence officials and Trump's inner circle.

Trump has never criticized Russia over the issue and infamously sided with President Vladimir Putin over his own intelligence agencies at a 2018 summit in Helsinki.