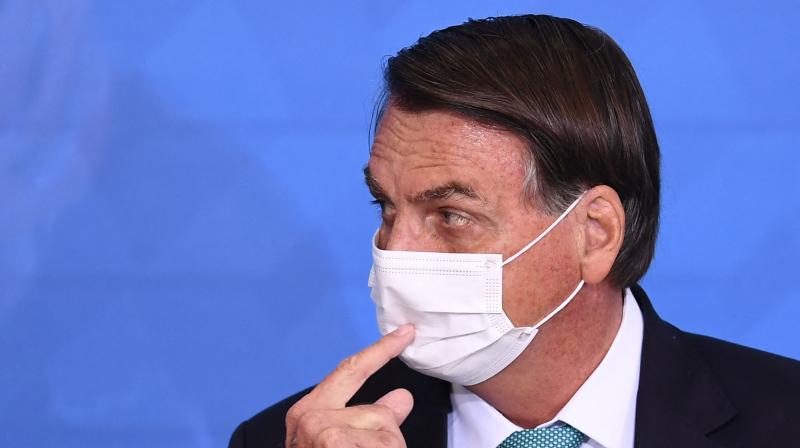 The deal to buy 20 million doses of Bharat Biotech's Covaxin shot has become a headache for Bolsonaro after whistleblowers went public with alleged irregularities. (AFP)

Rio De Janeiro: Brazil will suspend a $324 million Indian COVID-19 vaccine contract that has mired President Jair Bolsonaro in accusations of irregularities, the health minister said on Tuesday, following the guidance of the federal comptroller, the CGU.

The deal to buy 20 million doses of Bharat Biotech's Covaxin shot has become a headache for Bolsonaro after whistleblowers went public with alleged irregularities. One Health Ministry official said he alerted the president about his concerns.

Bolsonaro, whose popularity has faded as Brazil's COVID-19 death toll climbed past 500,000, has denied any wrongdoing, saying on Monday he was not aware of any irregularities. But thorny questions refuse to go away, and may pose problems for him ahead of next year's presidential vote.

Brazil Health Minister Marcelo Queiroga said at a news conference his team would probe the allegations during the suspension.

"According to the preliminary analysis of the CGU, there are no irregularities in the contract but, for compliance, the Health Ministry chose to suspend the contract," the ministry said in a statement.

Earlier on Thursday, CNN Brasil reported that the ministry had decided to cancel the contract.

Brazilian federal prosecutors have opened an investigation into the deal, citing comparatively high prices, quick talks and pending regulatory approvals as red flags. It is also being probed by a Senate panel investigating the government's handling of the pandemic.

One of the leading opposition senators on that panel filed a formal criminal complaint against Bolsonaro at the Supreme Court on Monday. Senator Randolfe Rodrigues said he wanted the court to investigate "the serious allegations" and to find out why Bolsonaro "did not take any action after being notified of the existence of a giant corruption scheme in the Health Ministry."

Meanwhile, issuing clarification on COVAXIN pricing controversy in Brazil, Bharat Biotech on Tuesday said it followed a step-by-step regulatory approval process during the eight-month period, but the company has neither received any advance payments nor supplied any vaccines to Brazil's Ministry of Health (MOH) as of now.

"In the specific case of procurement of COVAXIN by MOH Brazil, since the first meetings with MOH Brazil during Nov 2020, until June 29, 2021, a step by step approach has been followed towards contracts, and regulatory approvals, during this eight-month-long process. Emergency Use Authorization (EUA) received on June 4. As of June 29, Bharat Biotech has not received any advance payments nor supplied any vaccines to MOH Brazil. Bharat Biotech has followed a similar approach towards contracts, regulatory approvals and supplies in several countries worldwide, where COVAXIN is being supplied successfully," the company statement said.

The Hyderabad-based company clarified that the pricing of COVAXIN has been clearly established between USD 15 to USD 20 per dose for supplies to governments outside India.

"The pricing for Brazil has also been indicated at USD 15 per dose. Bharat Biotech has received advance payments from several other countries at the above price points, with supplies in process, pending approvals," it adds.

As per Bharat biotech, Precisa Medicamentos is a partner in Brazil, providing assistance, guidance and support with regulatory submissions, licensure, distribution, insurance, the conduct of phase III clinical trials, among other things and the Hyderabad-based vaccine maker follows a similar partnership model in all countries, where its vaccines are supplied, as it does not have its own offices in these countries.

The company also revealed that they are conducting a 5,000 subject phase III clinical trial in Brazil, which was recently approved by ANVISA. The trial will be conducted by the Albert Einstein Institute.

"Bharat Biotech and Precisa Medicamentos are conducting a 5000 subject phase III clinical trial in Brazil, which was recently approved by ANVISA. The trial will be conducted by the Albert Einstein Institute," the statement reads.

However, as per the company, COVAXIN has now received Emergency Use Authorizations in 16 countries including, Brazil, India, the Philippines, Iran, Mexico, among others and the company is in process of getting EUAs in 50 other countries worldwide.

"Bharat Biotech is in discussions with WHO to obtain Emergency Use Listing for COVAXIN. The product has been exported to several countries, with additional requests for supplies being received," the company said.