Seema Nanda, selected after 5-month search led by the current DNC CEO, will manage day-to-day operations when she takes charge next month. 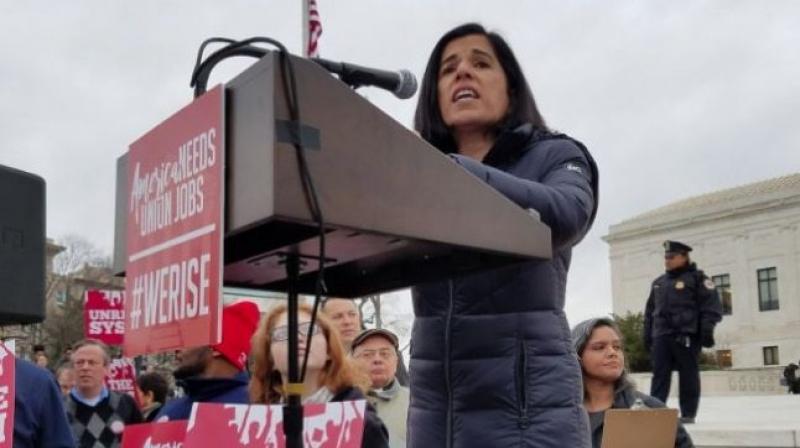 Nanda's experience also includes practising labour and employment law and she has served on the boards of several nonprofit organisations. (Photo: @AFSCME/Twitter)

Washington: Indian American Seema Nanda has been appointed as the CEO of the Democratic National Committee (DNC), the formal governing body for the Democratic Party, making her the first from the community to lead operations of a major political party in the US.

She has served on DNC Chair Tom Perez's transition team, which took a fresh look at the committee's operations following the 2016 election and put in place an infrastructure that contributed to wins in 2017 and 2018. Nanda was also the chief of staff to Perez during his stint as Secretary at the US Department of Labour.

"This position is the opportunity of a lifetime, for which I am incredibly honoured and humbled," said the incoming DNC CEO. "People are hurting all across our country. And I believe that Democrats are offering the positive solutions so desperately-needed right now –- solutions forged by the strength of our diversity, the rigour of our ideas, and the decency of our values. I am grateful to Chairman Perez and Mary Beth for selecting me, and I look forward to joining my new DNC colleagues in the fight for our nation's values and future," a DNC press statement quoted her as saying.

While at the Labour Department, she also worked as deputy solicitor and as deputy chief of staff and senior counsellor to Perez, managing a portfolio that included immigration, workforce development, and internal management issues.

Perez said he has seen firsthand Nanda's exceptional ability to lead and was excited about her role in DNC.

"She is a seasoned manager who has a proven track record of success and a well-documented history of fighting for our Democratic values, whether it's on immigration, civil rights or levelling the playing field for our workers," he said.

"As we head toward such a crucial election, I'm one hundred per cent certain that Seema's leadership will help the DNC capitalise on the unprecedented grassroots energy and enthusiasm surging throughout the country," he added.

Nanda's experience also includes practising labour and employment law and she has served on the boards of several non-profit organisations.

Most recently, she has served as the Executive Vice President and Chief Operating Officer at The Leadership Conference on Civil and Human Rights, an umbrella body of American civil rights interest groups, where she oversees strategy and manages day-to-day operations.

"If there's anything I've learned during my search for a permanent CEO, there's no shortage of qualified and passionate leaders in our party. Seema undoubtedly fits the bill," said Cahill, the Interim DNC CEO.

She is a graduate of Boston College Law School and Brown University and a member of the Massachusetts Bar Association.