Pak-origin family’s home vandalised, Quran torn up in US

The family found their apartment ransacked with the words '(expletive) Muslims' scrawled on a wall, they told police. 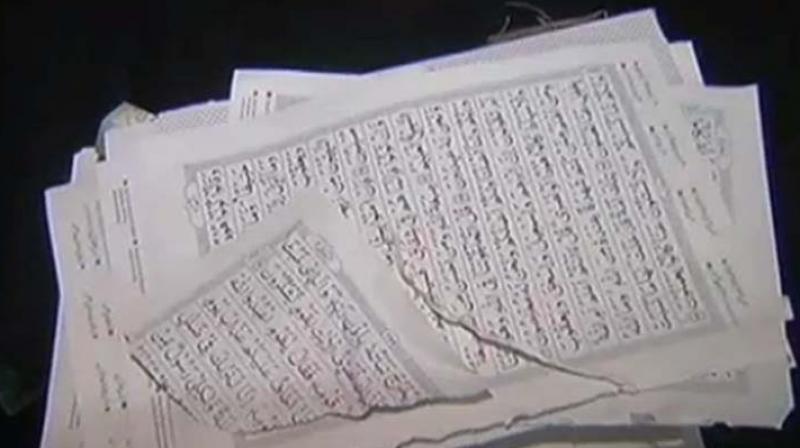 Mahrukh and Shoaib, who were born in Pakistan, told NBC Washington that their home was burgled and their Quran was torn. (Photo: Screengrab)

Washington: A Pakistani-origin family’s home in the US has been ransacked by burglars who scrawled hate graffiti on a wall and stole their green cards along with $25,000 worth of gold in an apparent bias-related incident.

The family, residents of an apartment in Fairfax County, Virginia, returned home from a weekend away and found their apartment ransacked with the words “(expletive) Muslims” scrawled on a wall, they told police.

Mahrukh and Shoaib, who were born in Pakistan, told NBC Washington that their home was burgled and their Quran was torn. Fairfax County police are investigating the crime as a burglary and bias incident.

“I was crying. It was bad. It was bad,” Mahrukh was quoted as saying.

Family members’ green cards were taken, along with more than $25,000 worth of gold they received as a wedding gift. The drawers and cupboards had been emptied, the beds were stripped, and the mattresses were overturned.

But the discovery of the torn-up Quran was the most painful discovery, the family said.

Shoaib said the crime had stunned him. He had felt safe in the neighbourhood, where his family moved just last month from Dubai. Mahrukh and Shoaib said they believe who ever damaged their home meant to burgle it and then vandalised it once they realised they were in a Muslim home.

The Council on American-Islamic Relations (CAIR) has called for a hate crime investigation. “What may have begun as a break-in clearly ended as a possible hate crime,” CAIR spokesman Ibrahim Hooper said in a statement.

“The message of hate left at the scene and the damage done to religious texts indicate the need to investigate a bias-motive for this crime,” he said. Friends of Mahrukh and Shoaib’s family started a GoFundMe page to help them rebuild.