US resumes direct flights to Cuba after 50 years

After setting off from Miami with a water cannon salute, an American Airlines flight touched down at Jose Marti international airport. 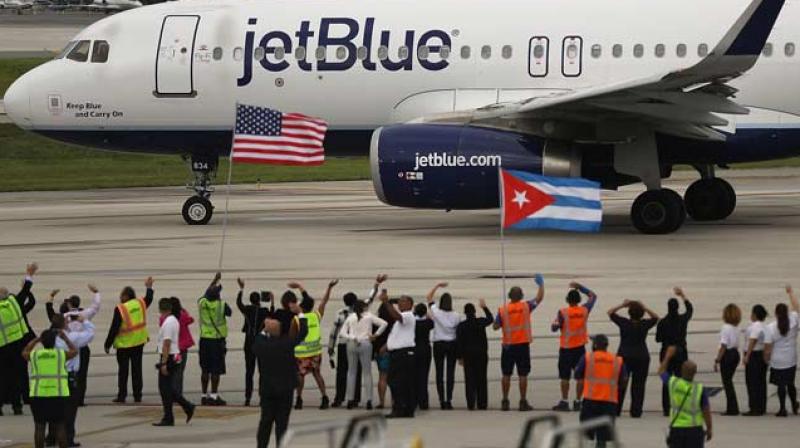 It was the first time in more than 50 years a US airline provided regular commercial service to Havana. (Photo: AFP)

Havana: US airlines resumed direct flights to Havana on Monday, a sign of the changing times just as the Cuban capital held a tearful memorial for late revolutionary leader Fidel Castro.

After setting off from Miami with a water cannon salute, an American Airlines flight touched down at Jose Marti international airport at 8:45 am (1345 GMT).

It was the first time in more than 50 years a US airline provided regular commercial service to Havana.

"It's something historic. We were expecting this for a long time here," said American passenger Edgar Salveani on arrival.

The first JetBlue Airways flight from New York to Havana arrived shortly after. Commercial flights between Cuba and the US had already resumed in August under the historic rapprochement the old Cold War foes announced in December 2014. But these are the first to Havana.

In an added dose of symbolism, they come just three days after Castro's death at age 90 turned a page on the revolutionary leader's divisive legacy.

As the planes touched down, hundreds of thousands of Cubans were streaming onto Havana's iconic Revolution Square to pay their last respects to Castro, who ruled the island with an iron fist from 1959 to 2006.

"It's a once in a lifetime experience, it will be interesting to see how people are responding to his passing," passenger Priva Rhat told reporters on the American Airlines flight.

Air travel between the United States and Cuba had been restricted to charter flights from 1979 until earlier this year.

Direct commercial flights began on August 31, linking several US airports with nine Cuban cities, many of them in or near tourism hotspots.

There are now 110 scheduled daily flights from the United States to Cuba, 20 of them to Havana.

The direct flights were one of several watershed changes initiated after US President Barack Obama and Castro's successor, his younger brother Raul, announced a thaw after more than 50 years of hostility. Diplomatic relations were restored in July 2015.

Washington still bans Americans from visiting Cuba as tourists, but travel is permitted for 12 other categories, including cultural and educational exchange.