Inside the dark, dangerous world of Mexico’s ‘moles’ 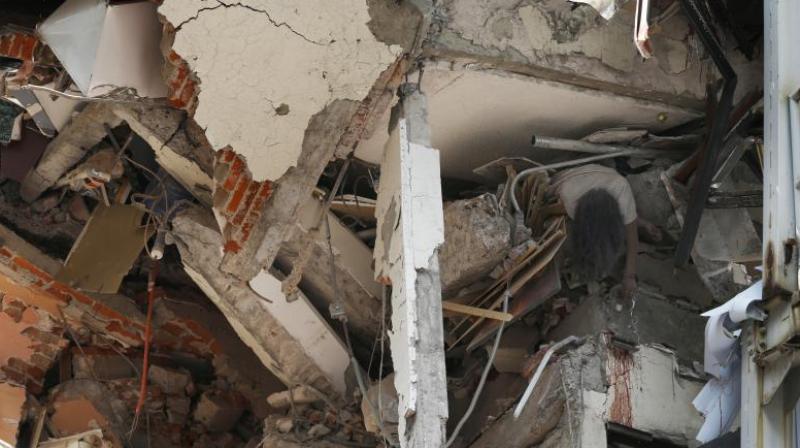 The body of woman hangs crushed by a collapsed building in the neighborhood of Roma Norte, in Mexico City. (Photo: AP)

Mexico City: Ismael Villegas is on vacation, but you wouldn’t know it to look at him.

He hasn’t showered in a week, he’s been sleeping a few hours a day on the floor of a strip club, and he spends the rest of his time digging through the rubble of a building that collapsed in Mexico’s earthquake last week.

Villegas is a “topo”, the Spanish word for mole — volunteer rescuers who tunnel into the concrete-and-steel mountains of collapsed buildings, looking for survivors and dragging them out.

It is a tradition that dates back to another earthquake in 1985 that killed more than 10,000 people and flattened hundreds of buildings in Mexico City.

Villegas, who was 14 at the time, remembers watching in fascination as scrappy young men and women tunnelled into the abyss to pull out trapped survivors.

It involves crawling into the cavities left by the collapse, then tunnelling horizontally through the wreckage floor by floor, looking for air pockets where people may be alive.

It is faster and less expensive — but far more dangerous — than the standard international technique.

When last Tuesday’s earthquake shook Mexico City, Villegas was 700 km (400 miles) away, in the southern state of Oaxaca, helping clean up damage caused by an earlier quake on September 7.

As soon as the ground stopped shaking, he jumped in his car and rushed back to Mexico City, where reports were already emerging of collapsed buildings with people trapped inside.

“I drove as fast as I could. It was a 10-hour drive. I got here at two in the morning and jumped straight into the rubble. My team and I managed to get seven survivors out,” he said.