Taking to Twitter Donald Trump condoled the incident and urged for the safety of people at the venue of the festival. 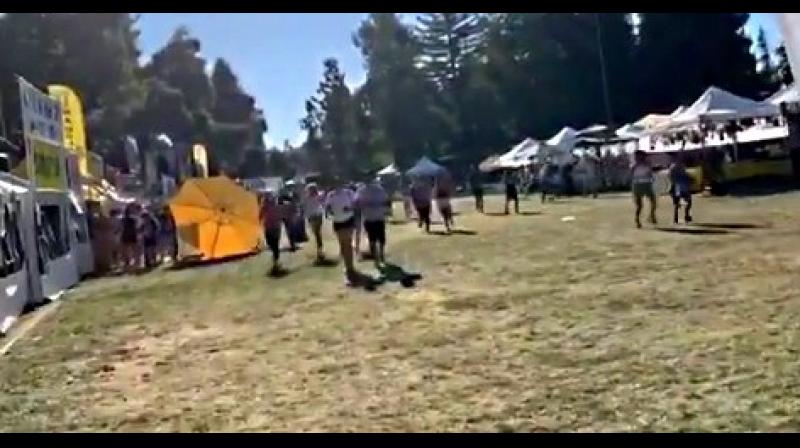 A shooting at a major food festival in the US state of California caused multiple casualties on Sunday, police said. (Photo: screengrab/Twitter)

Gilroy: Four people have been killed and 11 others were injured after a shooting at a festival in Gilroy, California on Monday, said the police. As per reports, the guman have been shot to death.

Santa Clara Valley Medical Center has received two victims from the shooting at the Gilroy Garlic Festival and expects three more, spokeswoman Joy Alexiou said. She had no information on their conditions.

Witnesses to the shooting about 5:30 p.m. described the confusion and panic at the scene, the Mercury News reported.

Evenny Reyes of Gilroy, 13, told the newspaper that spent the day at the festival with her friends and relatives.

“We were just leaving and we saw a guy with a bandana wrapped around his leg because he got shot. And there were people on the ground, crying,” Reyes said. “There was a little kid hurt on the ground. People were throwing tables and cutting fences to get out.”

Reyes said that she didn’t run at first because the gunshots sounded like fireworks. “It started going for five minutes, maybe three. It was like the movies — everyone was crying, people were screaming.”

Todd Jones, a sound engineer, told the newspaper that he was at the front of the festival’s Vineyard stage when he heard what sounded like a firework. “But then it started to increase, more rapidly, which sounded more like gunfire, and at that point people realized what was happening,” Jones said.

Natalie Martinez, a Gilroy Resident, told the Mercury News that she had gone to get food and separated from her two daughters. “I ran to find the girls . and we basically ran into each other. I thought, We’re open prey. It was awful.”

yo somebody was shooting at the gilroy garlic festival. be safe pic.twitter.com/B39ZIYe8wr

“The hearts of Gilroy PD and entire community go out to the victims of today’s shooting at the Garlic Festival,” the local police department tweeted.

The hearts of Gilroy PD and entire community go out to the victims of today's shooting at the Garlic Festival. The scene is still active. If you are looking for a loved one, please go to the reunification center at Gavilan College at parking lot B. #GilroyActiveshooter

NBC News reported that there were at least five victims of the shooting, which took place at one of the largest food festivals in the country, which is held about 30 miles (48 kilometers) southeast of San Jose.

The channel quoted a witness named Julissa Contreras as saying a white man in his 30s carried out the shooting with a rifle.

“I could see him shooting in just every direction. He wasn’t aiming at anyone specifically. It was just left to right, right to left,” Contreras said, according to NBC.

Taking to Twitter US President Donald Trump condoled the incident and urged for the safety of people at the venue of the festival.

Law Enforcement is at the scene of shootings in Gilroy, California. Reports are that shooter has not yet been apprehended. Be careful and safe!

“Grateful to first responders who are on the scene in Gilroy and keeping those injured by such senseless violence in my thoughts,” Senator Kamala Harris, who is running for the 2020 Democratic presidential nomination, wrote on Twitter.

Simply horrific. I'm grateful to the first responders who are on the scene in Gilroy, and my thoughts are with that community tonight. Our country has a gun violence epidemic that we cannot tolerate. https://t.co/WqWNxGAQnA

Shootings are a frequent occurrence in the United States, but despite the scale of the gun violence problem in the country, efforts to address it legislatively have long been largely deadlocked at the federal level.