Tough action must be taken against Pak for backing terror: US Senator

John McCain called for authorisation of US forces to target the Haqqani network, Taliban and other terrorist groups. 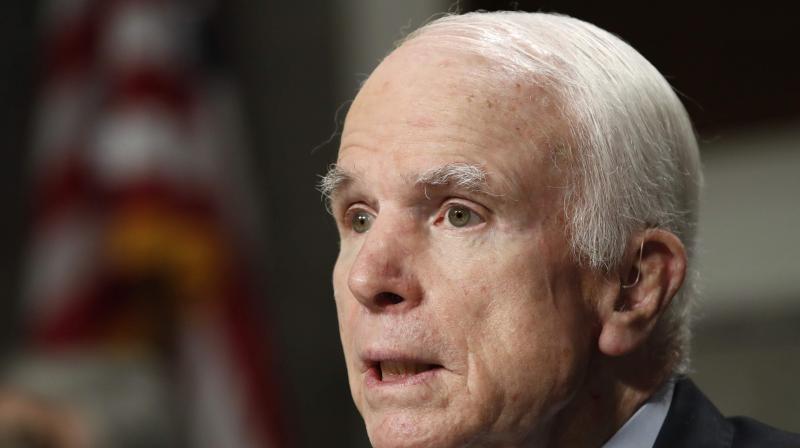 Mr McCain is chairman of the powerful Senate Armed Services Committee and legislative moves by him always get through the Congress. (Photo: AP)

Washington: Top US Senator John McCain has moved a legislative amendment in the Senate to impose gradual diplomatic, military, and economic costs on Pakistan if it continues to provide support to terrorist groups, including the Taliban and the Haqqani network.

The move, as an amendment to the National Defense Authorization Act (NDAA) 2018, is part of an effort by Senator McCain to establish lasting peace and stability in Afghanistan, and to prevent this war-torn country from being a launch pad for terrorist attacks against the United States.

Read: Won't give military aid to Pak as it did not act against Haqqani network: US

Mr McCain is chairman of the powerful Senate Armed Services Committee and legislative moves by him always get through the Congress.

The Senate amendment 609 to NDAA-2018 says that it is the sense of the US Congress to deny, disrupt, degrade, and destroy the ability of terrorist groups to conduct attacks against the US, its allies, and its core interests. The amendment also allows it to prevent Taliban from using military force to overthrow the Afghan Government and reduce the Taliban's control of the Afghan population.

As part of this objective, McCain calls for strengthening the Afghan security forces, authorisation of US forces to target terrorists of the Haqqani network and the Taliban and others. He also calls for regional diplomatic initiatives including India under this move.

The legislative amendment calls for ‘imposing graduated diplomatic, military, and economic costs on Pakistan as long as it continues to provide support and sanctuary to terrorist and insurgent groups, including the Taliban and the Haqqani network.

"It calls for simultaneously outlining the potential benefits of a long-term United States-Pakistan strategic partnership that could result from the cessation by Pakistan of support for all terrorist and insurgent groups and constructive role in bringing about a peaceful resolution of the conflict in Afghanistan."

Moved on the Senate floor on Thursday, the amendment also calls for intensifying America's regional diplomatic efforts working through flexible frameworks for regional dialogue together with Afghanistan, Pakistan, China, India, Tajikistan, Uzbekistan, Turkmenistan, and other nations to promote political reconciliation in Afghanistan.

The move is also aimed towards advance regional cooperation on issues such as border security, intelligence sharing, counter-narcotics, transportation, and trade to reduce mistrust and build confidence among regional states.

Read: India, US call on Pakistan to stop cross-border terrorism

Calling for increasing the number of US counter terrorism forces in Afghanistan; the amendment calls for providing the United States military with "status-based targeting authorities" against the Taliban, the Haqqani Network, al Qaeda, ISIS, and other terrorist groups that threaten the United States, its allies, and its core interests.

Yesterday, in a statement, Mr McCain rued on the delay in its passage. "It is unfortunate that one senator chose to block consideration of a bill our nation needs right now, the National Defense Authorization Act," he said.

"For 55 years in a row, Congress has passed the National Defense Authorization Act, which provides our men and women in uniform with the resources, capabilities, and pay and benefits that they need to perform their missions on behalf of the American people and keep our country safe. This legislation is more vital than ever," Mr McCain said.

"Global terrorist networks, increasing great power competition with Russia and China, malign Iranian influence spreading across the Middle East, a North Korean dictator racing to acquire missiles that can hit the United States with nuclear weapons - the threats to our national security have not been more complex or daunting than at any time in the past seven decades," he said.