'We're putting out a paper tomorrow': US reporter after shooting at office

Phil Davis, a reporter who was hiding under his desk at time of shooting said, 'it was like a war zone inside'. 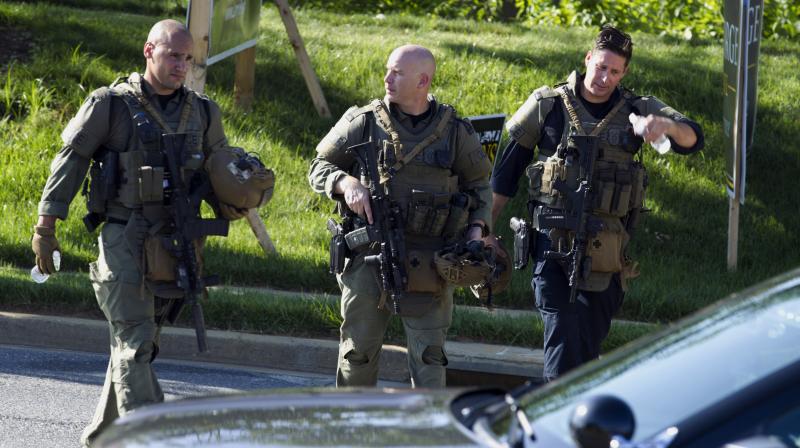 It took officers -- trained to respond to the mass shootings that have become a regular occurrence in the country -- just 60 seconds to arrive on site. (Photo: AP)

Annapolis, Maryland (US): In the shade of a car park in Maryland’s capital Annapolis, three journalists from the Capital Gazette typed grimly away -- still without news of colleagues killed or injured when a gunman stormed the publication earlier Thursday.

Read: Upset with newspaper, US gunman kills 5 in newsroom shooting

“We’re putting out a paper tomorrow,” vowed Chase Cook, one of six reporters at the daily, where the latest mass shooting to rock the United States left five people dead.

His photographer colleague Joshua McKerrow had his laptop perched on the back of a pick-up truck.

Their deadline had been pushed back to 9:30 pm.

Chase was working from his smartphone -- from which he could access the newspaper’s editorial system.

“We’re going to have a paper,” said the young man, who has worked since 2013 for The Capital, a local daily whose roots go back to 1727 -- and which police believe was deliberately targeted in Thursday’s attack.

“I don’t know what else to do except this,” he said. “We’re just doing our job.”

Chase was not inside the paper’s offices when the gunman -- identified as a white man in his late 30s -- burst in and opened fire.

“All I know is five people are dead,” he said.

Police were looking into social media threats received by the paper, which employs a small team of 13 journalists and photographers out of a ground floor office at 888 Bestgate Road -- behind a glass door that usually stays shut.

According to Phil Davis, one of the reporters who was inside at the time and tweeted an account of the assault, the gunman shot through the door and opened fire on staff inside -- as others including himself hid under their desks.

Describing the attack to the Baltimore Sun, which owns the Capital Gazette, Davis said it “was like a war zone” inside, a situation that would be “hard to describe for a while.”

Davis said he was still hiding under his desk when the shooting stopped -- and police swarmed the building taking the suspect into custody.

It took officers -- trained to respond to the mass shootings that have become a regular occurrence in the country -- just 60 seconds to arrive on site, according to an official.

Many of the office workers inside the four-story building were alerted to the shooting by the police sirens wailing outside.

A lockdown was ordered immediately.

Sean Robinson, who works for an insurance company on the building’s top floor, took shelter away as far as possible from the entrance and texted his wife to say, “Hey, this is going on. Just pray.”

When he heard a sound at the door, he asked himself -- “friend or foe?”

It turned out to be a SWAT team, armed with assault rifles.

Two floors down, Gracie Rustin, a young dental assistant was in the middle of a procedure with a patient when she heard several sets of “loud noises” but didn’t immediately realize it was a shooting.

From a nearby shopping centre, where she was escorted to safety along with other office workers, she recounted how the police rushed in and evacuated everyone: “They were like, ‘Leave, leave, leave!’“

“As soon as the elevator doors opened, the cops with guns were like, ‘Hands up! Hands up!’ and I just started crying immediately.”