According to media reports, postponement of 2+2 dialogue was due to US dismantling sanctions relief given to Iran under 2015 nuclear deal. 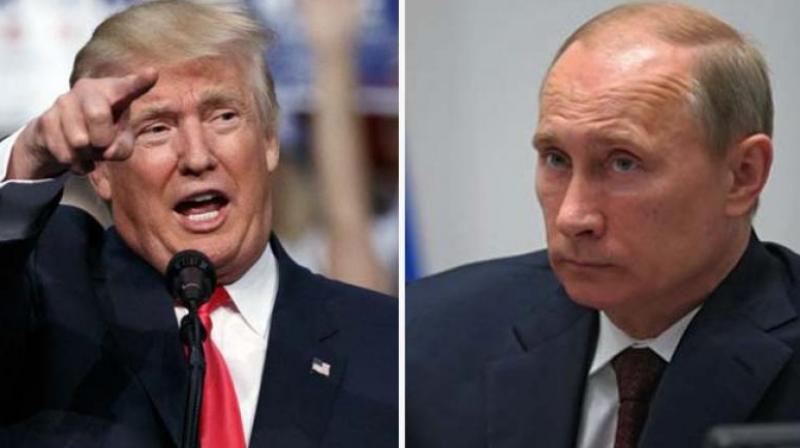 United States Secretary of State Michael R. Pompeo had on Thursday, said that the postponement of the July 6 2+2 dialogue with India was for reasons entirely unrelated to the warm bilateral relationship that Washington and New Delhi share. (Photo: File/AP)

Washington: The 2+2 Summit was postponed due to American preoccupation with the crucial forthcoming summit between United States President Donald Trump and his Russian counterpart Vladimir Putin, sources speculate.

Trump and Putin are set to hold a summit on July 16 in Helsinki, Finland, announced the Kremlin and the White House on Thursday.

The two leaders are likely to discuss issues related to national security as well as the issue of Russian meddling in the 2016 US presidential election.

The US-Russia summit will be taking place four days after a NATO meeting in Brussels, Belgium, where Trump will meet leaders of US military allies.

Politicians, bureaucrats hold different opinions about the delaying of the 2+2 summit.

"It sounds like the postponement may have to do with Mike Pompeo having to be at the US Russia Summit. I find that to be wholly insufficient justification. The 2+2 should have been a major priority for the White House," Micheal Kugelman of the Wilson Center said.

"The postponement by the United States did not seem to have anything to do with India, instead it is due to scheduling reasons for the two secretaries Pompeo and Mattis for issues deemed more urgent," sources told ANI.

Joshua White, a former Obama administration official said, "The postponement of the 2+2 sounds like a scheduling problem arose and more than a little unfortunate yet embarrassing for the United States."

Sources also rubbished rumours that talk about lists of disputes were rising faster than one can keep count of the two democracies.

Experts said there was also a speculation on differences between India and the US on Iran, a reason that can be waived off for the postponement of 2+2.

According to various media reports, the postponement of the 2+2 dialogue has come in the backdrop of the United States dismantling sanctions relief provided to Iran under the 2015 nuclear deal.

United States Secretary of State Michael R. Pompeo had on Thursday, said that the postponement of the July 6 2+2 dialogue with India was for reasons entirely unrelated to the warm bilateral relationship that Washington and New Delhi share.

In a statement, the US Embassy in New Delhi said that Pompeo spoke last night with External Affairs Minister Sushma Swaraj to convey his regret for having to postpone the 2+2 dialogue. This scheduling change was prompted by reasons entirely unrelated to the bilateral relationship and Pompeo and Swaraj agreed to reschedule the 2+2 dialogue as soon as possible.

The 2+2 dialogue was scheduled for July 6 and was going to be the first simultaneous meeting of Indian and American defence and external affairs ministers -- Nirmala Sitharaman and Sushma Swaraj from India, and James Mattis and Michael Pompeo from the United States in a format that was announced last August.

According to these reports, the US State Department has earlier told media in Washington that the Trump Administration has asked India and China to stop all imports of Iranian oil by November 4 or face sanctions.

One foreign media news agency quoted US Permanent Representative to the United Nations Nikki Haley, as saying in New Delhi that she told the Indian leadership, including Prime Minister Narendra Modi that it is important for India to cut its dependence on Iranian oil. She also confirmed that Washington would soon be imposing sanctions on Tehran.

The 2+2 dialogue was announced last August following a call between Prime Minister Modi and President Donald Trump. The July 6 meeting was to focus on "strengthening strategic, security and defence cooperation".

The meeting was earlier scheduled for April but was put off when President Trump fired then Secretary of State Rex Tillerson.