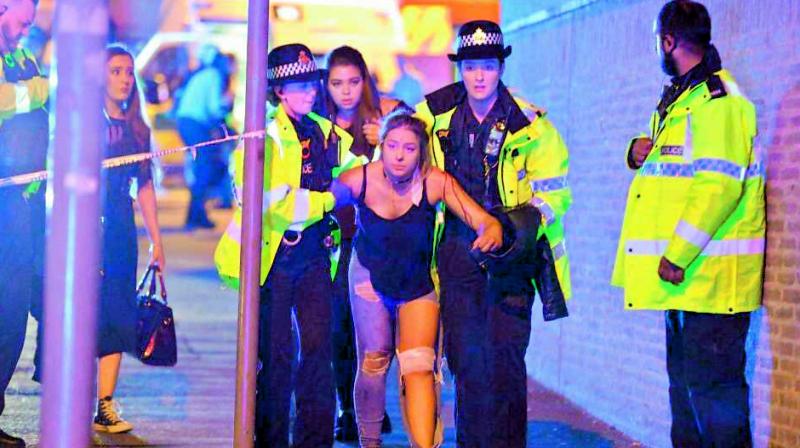 An injured fan being escorted from the scene of a terrorist attack during a pop concert by US star Ariana Grande in Manchester, northwest England. (Photo: AP)

A 22-year-old Libyan-origin suicide bomber set off a powerful homemade bomb at a concert of US pop star Ariana Grande in Manchester on Monday night, killing at least 22 people and injuring 59 others, in the deadliest terror attack in Britain since the 2005 London bombings.

Greater Manchester Police identified the attacker as Salman Abedi. Born in Manc-hester, he is the second youngest among four children of a Libyan refugee couple who came to the UK to escape the Gaddafi regime.

US authorities have claimed that Abedi was a British citizen who was known to authorities. Abedi is registered as living at the residence and the property is now believed to be the centre of the investigation. The ISIS terror group claimed responsibility for the bombing and warned of more attacks. Screaming concert-goers, including children fled the venue on Monday night in panic after the powerful blast struck the Manch-ester Arena — Europe’s largest indoor arena.

Children and teenagers were among the dead because of the very young demographic of the fans.

Two tweets appeared to have predicted the suicide bombing four hours before the attack. Twitter, which has since suspended the account, confirmed the tweet which read “Are you forget our threat?” and included a #ManchesterArena hashtag, the Daily Mail reported.  A second tweet read: “We have more.”

In another forum, a man  reportedly posted: “Tomorrow night, I will  go to the Manchester Arena Grande concert and throw my handmade grenade in there.”