Carter last month became the first US president to reach the age of 95. 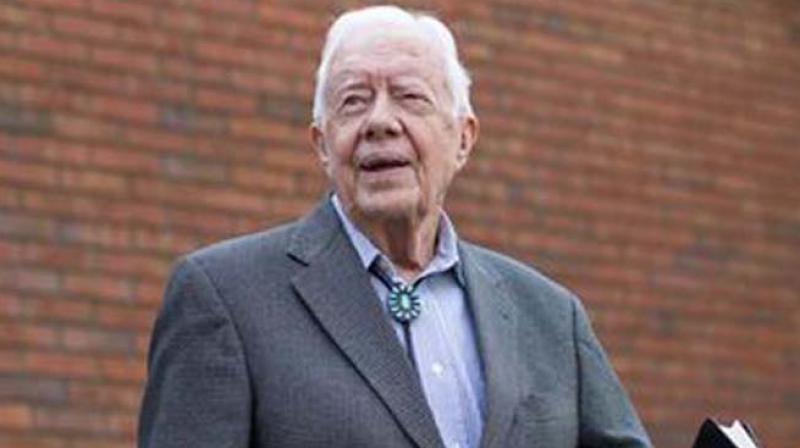 As the years passed, a more nuanced image of Carter emerged that took in his post-presidential activities and reassessed his achievements. (Photo: AP)

Washington: Former US president Jimmy Carter was released from hospital on Wednesday after undergoing successful surgery to relieve pressure on his brain caused by multiple falls, the Carter Centre said.

The 95-year-old underwent surgery at Emory University Hospital two weeks ago to ease the pressure on his brain caused by a subdural hematoma -- a buildup of blood resulting from a burst vessel.

The Carter Centre said the Nobel laureate planned to celebrate Thanksgiving on Thursday at his home in Plains, Georgia.

That injury came weeks after he hit his head in a fall at home. He recovered quickly to volunteer the next day -- with a black eye and a bandage covering 14 stitches -- at a site for the Habitat for Humanity homebuilding charity.

In office from 1977 to 1981, Carter placed a commitment to human rights and social justice at the core of his presidency.

He enjoyed a strong first two years, which included brokering a peace deal between Israel and Egypt dubbed the Camp David Accords.

But his administration hit numerous snags -- the most serious being the Iran hostage crisis and the disastrous failed attempt to rescue the 52 captive Americans in 1980.

As the years passed, a more nuanced image of Carter emerged that took in his post-presidential activities and reassessed his achievements.

He founded the Carter Centre in 1982 to pursue his vision of world diplomacy, and he was the recipient of the 2002 Nobel Peace Prize for his tireless efforts to promote social and economic justice.

In August 2015, Carter revealed he had cancer on his brain and was undergoing radiation treatment -- an illness he recovered from, seemingly against the odds.

Carter last month became the first US president to reach the age of 95.