Cuba mourns Fidel Castro, the symbol of an era

Castro ruled Cuba from 1959 until he handed power to his brother Raul in 2006 amid a health crisis. 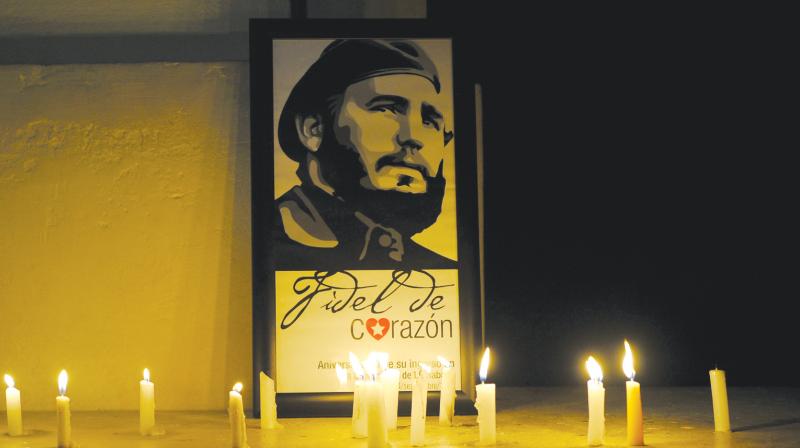 Students light candles in honour of Cuban historic revolutionary leader Fidel Castro a day after his death at the Havana University in Havana on November 26. (Photo: AFP)

Havana: Cuba mourned its revolutionary leader Fidel Castro on Sunday, as the communist island prepared to bid farewell to the towering giant of its modern history with memorials and a four-day funeral procession.

After the stunned commotion triggered by Saturday’s announcement that Castro, 90, had died, Sunday was set to be a day of preparations ahead of a flurry of events to mark his passing.

Castro, a titan of the 20th century who beat the odds to endure into the 21st, died late Friday after surviving 11 US administrations and hundreds of assassination attempts. No cause of death was given.

President Raul Castro said that his older brother’s remains would be cremated Saturday, the first of nine days of national mourning. There was no official confirmation on whether this had yet happened.

A series of memorials will begin Monday, when Cubans are called to converge on Havana’s iconic Revolution Square.

Castro’s ashes will then go on a four-day island-wide procession before being buried in the southeastern city of Santiago on December 4.

Santiago, Cuba’s second city, was the scene of Castro’s ill-fated first attempt at revolution in 1953 — six years before he succeeded in ousting US-backed dictator Fulgencio Batista.

Adored by supporters as a saviour and reviled by enemies as a tyrant, Castro ruled Cuba from 1959 until he handed power to his brother Raul in 2006 amid a health crisis.

Even in retirement Castro wielded influence behind the scenes, and regularly penned diatribes against American “imperialism” in the state press.

The news of Castro’s death drew strong — and polarised — reactions across the world.

In Miami, just 370 kilometers (230 miles) away, crowds of Cuban-Americans danced in the streets for a second night, celebrating Castro’s death.

Among the cacophony of car horns, drums, loud music and singing in the city’s Little Havana neighbourhood, a chant rang out: “Fidel, you tyrant, take your brother too!”

Some two million Cubans live in the United States, nearly 70 per cent of them in Florida. Of those, the vast majority live in Miami.

Cuban-American politicians excoriated Castro, with Florida Senator Marco Rubio calling him an “evil, murderous dictator who inflicted misery and suffering on his own people.”

However Russian President Vladimir Putin hailed Castro as “the symbol of an era,” and China’s Xi Jinping said “Comrade Castro will live forever.”

There were sharply different US reactions from outgoing President Barack Obama and President-elect Donald Trump.

Obama, who embarked on a historic rapprochement with Cuba in 2014, said the US extended a “hand of friendship” to the Cuban people.

But Trump dismissed Castro as “a brutal dictator.” The future of the US-Cuban thaw is uncertain under Trump, who has threatened to reverse course if Havana does not allow greater human rights.

The bustling streets of Havana emptied and parties ground to a halt as Castro’s admirers sank into grief.

The city was oddly silent late Saturday, as night clubs closed and liquor sales were limited, part of the official days of mourning.

“What can I say? Fidel Castro was larger than life,” said a tearful Aurora Mendez, 82. She recalled a life in poverty before Castro’s revolution in 1959. “Fidel was always first in everything, fighting for the downtrodden and the poor,” she said.

Indiana Valdes and her husband Maykel Duquesne, who work at a state-run bank, worried about life after Fidel.

“Fidel was the island’s protector, he was everywhere,” said Valdes, 43.

Choking back tears, Valdes recalled a lifetime under El Comandante. Will socialism survive his death? She looked at her husband and shrugged. “I don’t know,” she said.

Cab driver Armando Lobaina, 50, admits that he cried on hearing the news. “Without Fidel I feel empty,” he said.

Lobaina hoped that Raul Castro and whoever succeeds him prevents the collapse of Cuba’s socialist system and the “good things” that it provides, such as free health and education. But he still worries. “Things can’t change too abruptly because there are people who don’t like change,” he said, adding that it is now all down to the top Communist Party leaders.

Fidel Castro, who came to power as a bearded, cigar-chomping 32-year-old, adopted the slogan “socialism or death” and kept his faith to the end.

Castro survived more than 600 assassination attempts, according to aides, as well as the failed 1961 US-backed Bay of Pigs invasion.

His outrage over that botched plot contributed to the Cuban Missile Crisis in 1962, when the Soviet Union accepted his request to send ballistic missiles to Cuba.

The US discovery of the missiles pushed the world to the brink of nuclear war.

But Fidel managed to hang on. He ceded power to his brother Raul in July 2006 to recover from intestinal surgery. The father of at least eight children, Fidel Castro was last seen in public on his 90th birthday on August 13.