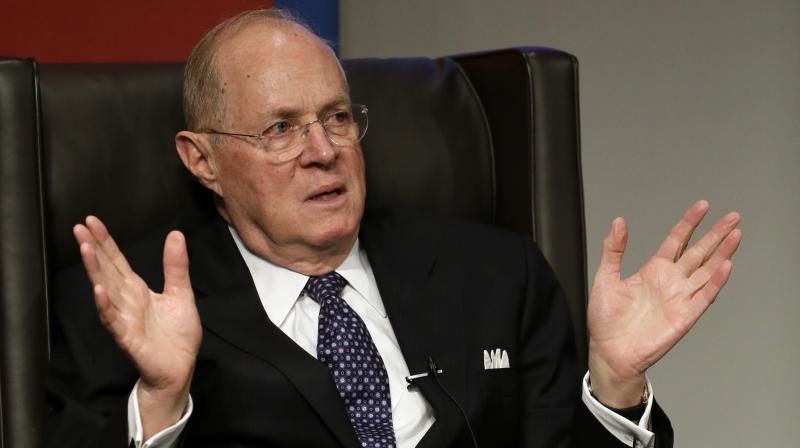 Nominated by President Ronald Reagan, the 81-year-old Kennedy took his oath of office in 1988. (Photo: AP)

Washington: President Donald Trump on Wednesday secured a historic chance to shift the US Supreme Court decisively to the right as Justice Anthony Kennedy, the tie-breaking vote between the bench's liberal and conservative judges, announced he is to retire.

Kennedy's departure at the end of July will give Trump the opportunity to appoint his second justice to the nine-seat bench, which exerts a deep and far-reaching influence on American life.

"It has been the greatest honour and privilege to serve our nation in the federal judiciary for 43 years, 30 of those on the Supreme Court," Kennedy was quoted as saying in announcing his decision.

Nominated by President Ronald Reagan, the 81-year-old Kennedy took his oath of office in 1988. He said he was stepping aside to spend more time with his family.

Paying tribute to Kennedy as "a great justice of the Supreme Court," Trump told reporters the replacement process will "begin immediately."

"Hopefully we will pick someone who is just as outstanding," he told reporters in the Oval Office.

He said Kennedy's successor -- who like all Supreme Court justices will be appointed for life -- would be selected from among a list of 25 possible candidates, 20 identified during his presidential campaign, and five added since.

"We have a very excellent list of great, talented, highly intelligent, hopefully, tremendous people," he said.

At a rally in North Dakota later on Wednesday, Trump described Kennedy as a "great man" who trusted him to pick his successor.

"I'm very honoured that he chose to do it during my term in office because he felt confident in me to make the right choice and carry on his great legacy, that's why he did it," Trump said of Kennedy's decision to retire.

Kennedy's departure sets the stage for a brutal battle over his succession, a blueprint for which was established by Republican lawmakers in 2016 when they denied then-president Barack Obama the opportunity to fill the seat left vacant following the death of conservative justice Antonin Scalia.

Now, Democrats argue that Trump's pick should not be put to a vote until after new legislators are elected in midterm polls this fall.

"Millions of people are just months away from determining the senators who should vote to confirm or reject the president's nominee, and their voices deserve to be heard," said Chuck Schumer, the top Democrat in the US Senate.

"Anything but that would be the absolute height of hypocrisy."

But Republican Senate Majority Leader Mitch McConnell indicated he was opposed to waiting, saying that "we will vote to confirm Justice Kennedy's successor this fall."

Kennedy's vote, positioned at the very centre of the court, gave him a place of special prominence among the nine justices.

He has cast the deciding vote in a number of historic cases, including the high court's groundbreaking decision in 2015 legalizing gay marriage, a five-to-four decision for which he wrote the opinion.

For years, Kennedy infuriated conservatives with decisions striking down prayer at public school graduations and upholding abortion rights -- and exasperated liberals with decisions on affirmative action and campaign finance laws.

His departure gives Trump his second Supreme Court pick since arriving at the White House, following the nomination of Neil Gorsuch, and could spell a decisive shift to the right for the top judicial body.

Gorsuch was sworn in in April last year to fill a more than year-long vacancy left by the death of Scalia, a delay orchestrated by McConnell to deny Obama the nomination.

Democrats were enraged, but with Republicans controlling both the Senate and the House, they have limited leverage to push back over Trump's second pick for the court, the final arbiter on such divisive issues as gun rights or abortion.

Control over Supreme Court nominations has become a hot-button issue for the US electorate, with 70 per cent of respondents in a 2016 CNN poll saying it was an important factor in their vote.

November's midterm elections are expected to produce a bitter struggle for control of Congress in a deeply polarized country, especially if a court seat is still in play.

Gorsuch's influence has already been felt in a series of recent court decisions that have backed a modified version of the president's travel ban on visitors from Muslim-majority countries, bolstered anti-abortion activists and dealt a serious blow to labour unions.

If Trump, as expected, nominates a steadfast conservative to the bench, that shift is likely to become entrenched for many years to come.