Trump cracked joke on Ronaldo running for president against Marcelo Rebelo de Sousa, who said, 'Portugal is not just the United States'. 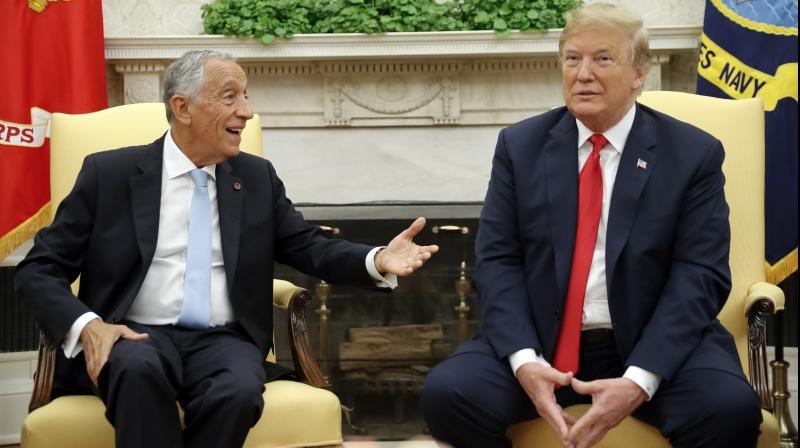 Trump greeted Rebelo de Sousa in the Oval Office and then turned to the cameras to offer his reaction to Supreme Court Justice Anthony Kennedy’s retirement. (Photo: AP)

At one point, Trump even broached the subject of a political career for Portugal’s soccer star Cristiano Ronaldo.

Trump greeted Rebelo de Sousa in the Oval Office and then turned to the cameras to offer his reaction to Supreme Court Justice Anthony Kennedy’s retirement. The vacancy gives Trump a golden chance to cement conservative control of the nation’s high court — and the president wanted to make sure his out-of-town guest was aware of the stakes.

“In our country, the selection of a justice of the United States Supreme Court is considered, I think we can all say, one of the most important events,” Trump told Rebelo de Sousa, adding that the court can “swing different ways” depending on its composition.

“Some people think outside of, obviously war and peace, it’s the most important thing that you could have,” Trump said.

Rebelo de Sousa concurred, noting that he was also a constitutional law professor. “I just heard the news and I imagine how important it is for you,” he said, pivoting to Portugal’s role as the first neutral country to recognize America’s independence.

“I don’t know if you know it, but your Founding Fathers celebrated independence with our wine — with Madeira wine,” Rebelo de Sousa said. “They made a toast with our Madeira wine.”

The two leaders planned to hold talks on the upcoming NATO summit, trade and energy security. But the conversation quickly shifted to Russian President Vladimir Putin — whom Trump is expected to meet with next month — and World Cup soccer.

Rebelo de Sousa said he had recently met with Putin, who asked him to extend his greetings to Trump and was “expecting your visit.”

But the Portuguese leader also wanted to make sure Trump knew that his country has Ronaldo, the best soccer player in the world. “I’m sure your son knows it,” he told Trump. The president said his son, Barron, an avid soccer player, “knows all about it.”

With the spectre of a Supreme Court fight and tough mid-term elections ahead, Trump tossed out his own hypothetical. Would Ronaldo, the celebrity soccer star leading Portugal’s FIFA World Cup team, “ever run for president against you?”

“He wouldn’t win. You know he won’t,” Trump assured him.

Rebelo de Sousa wasn’t about to go there. “You know something. I must tell you, Portugal is not just the United States.”