The gunfire took place as President Maduro was speaking live on TV to pro-govt journalists at the presidential palace. 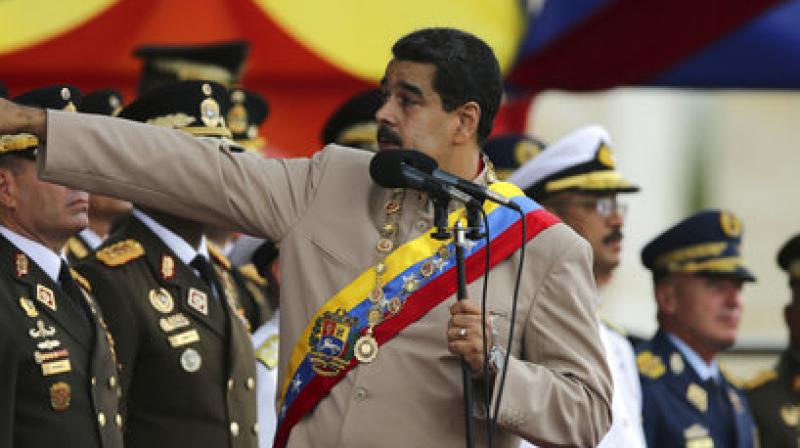 Maduro said the chopper fired upon offices of the court and launched a grenade that didn’t explode before buzzing over the interior ministry. (Photo: AP)

Caracas: President Nicolas Maduro said a helicopter fired on Venezuela’s Supreme Court on Tuesday in a confusing incident that he claimed was part of a conspiracy to destabilise his socialist government.

An Associated Press reporter heard gunfire as a blue helicopter buzzed through downtown but was unable to confirm where the shots were being fired from.

The gunfire took place as Maduro was speaking live on state television to pro-government journalists gathered at the presidential palace. He said the chopper fired upon offices of the court and launched a grenade that didn’t explode before buzzing over the interior ministry. He said the nation’s air defence was activated, thwarting what he called a “terrorist attack” and part of an ongoing coup attempt.

“It could’ve caused a tragedy with several dozen dead and injured,” said Maduro.

But many opponents on social media accused the president himself of trying to spread fear to help justify a crackdown against Venezuelan seeking to block his plans to rewrite the constitution.

Adding to the intrigue, pictures of a blue police helicopter carrying an anti-government banner appeared on social media around the same time as a video in which a pilot for the police squad, identified as Oscar Perez, called for a rebellion against the Maduro’s “tyranny” as part of a coalition of members of the security forces.

“We have two choices: be judged tomorrow by our conscience and the people or begin today to free ourselves from this corrupt government,” the man said while reading from a statement with four people dressed in military fatigues, ski masks and carrying what look like assault rifles standing behind him.