All Iraqis on deportation row get US court relief 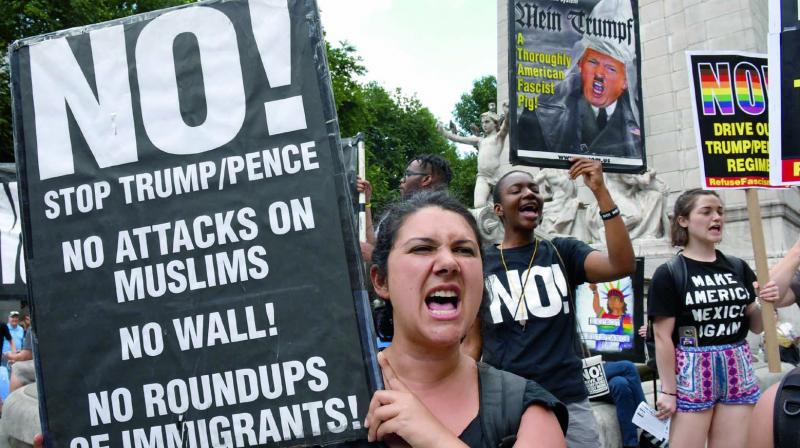 Protesters with ‘Today Refuse Fascism’ hoist signs at Columbus Circle in New York City on Monday prior to a march to Trump Tower to denounce the Supreme Court’s partial reinstatement of the travel ban on citizens of six Muslim countries. (Photo: AFP)

Detroit: A federal judge halted late on Monday the deportation of all Iraqi nationals detained during immigration sweeps across the United States this month until atleast July 10, expanding a stay he imposed last week.

The stay had initially only protected 114 detainees from the Detroit area. US district judge Mark Goldsmith sided with lawyers from the American Civil Liberties Union who filed an amended complaint on Saturday seeking to prevent Immigration and Customs Enforcement from deporting Iraqis from anywhere in the US.

The ACLU argued those being deported could face persecution, torture, or death because many were Chaldean Catholics, Sunni Muslims, or Iraqi Kurds and that the groups were recognised as targets of ill-treatment in Iraq.

Mr Goldsmith agreed with the ACLU on the grave consequences deportees may face, writing in his seven-page opinion and order that: “Such harm far outweighs any interest the government may have in proceeding with the removals immediately.”

On Thursday, he ordered a stay in the Michigan Iraqis’ deportation for at least two weeks while he decided whether he had jurisdiction over the merits of deporting immigrants who could face physical danger in their countries of origin. He expanded his stay on Monday to the broader class of Iraqis nationwide, saying it applies to removal of Iraqi nationals in the US with final orders of removal who have been or will be detained by ICE.