Castro’s relationship with India goes back decades when Nehru reached out to him. 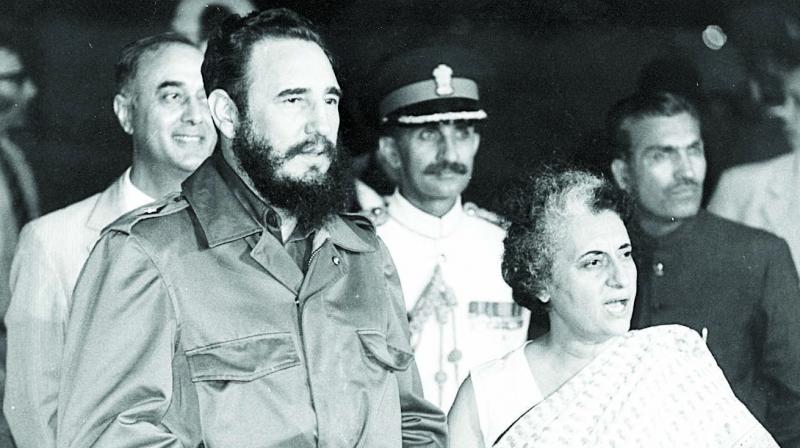 This file photo taken in 1976 shows Fidel Castro and Indira Gandhi taking part in a meeting in the United States. (Photo: AFP)

New Delhi: Fidel Castro’s bear hug to Indira Gandhi in the spring of 1983 at the Non-Aligned Movement summit here best symbolises his warm ties with India which always looked to the legendary leader as a “great friend”.

Under Jawaharlal Nehru, India was amongst the first countries to extend recognition to Cuba after the 1959 revolution led by Castro, who overthrew the Fulgencio Batista regime.

Unmindful of US sanctions on Communist Cuba starting from the Cold War era, India has always maintained political, trade, cultural and people-to-people relations for about six decades when even Washington has revised its stand.

It was Nehru who had reached out to the Cuban icon and told him that the non-aligned nations saw his leadership with immense hope.

Castro, who died on Saturday at the age of 90, had been denied the accomodation in five-star hotels in New York when he attended the UN General Assembly in 1960, and the owner of Theresa Hotel came and invited him to stay there. Then, important dignitaries paid him courtesy calls there. Years later, Castro told former external affairs minister K. Natwar Singh that, “The first person who came to see me was Prime Minister Nehru. I can never forget his magnificent gesture. I was 34 years old, not widely known. I was tense. Nehru boosted my morale. My tension disappeared.”

Castro’s relationship with India goes back decades when Nehru reached out to him and the friendship established between them was strengthened during Indira Gandhi’s tenure as the Prime Minister.

The bond of India-Cuba friendship is best symbolised with the unforgettable image of Castro embracing Indira Gandhi while handing over the NAM chairmanship to her in 1983 in New Delhi.

“Today, while handing over, after more than three years, the chairmanship of the Non-Aligned Movement to our admired Indira Gandhi and to India, that she in her historic right represents, we can affirm that we have a movement whose unity was not weakened, whose vigour has grown, whose independence has been withheld despite all the challenges it faced...,” he had said at the time.

Castro and Gandhi had met on several occasions in the past. In September 1973, she hosted a dinner for him in Delhi when he was on his way to Vietnam.