Asked if Antigua would help in extraditing Choksi, Greene told, 'I think it is only appropriate if you speak to your Foreign Minister.' 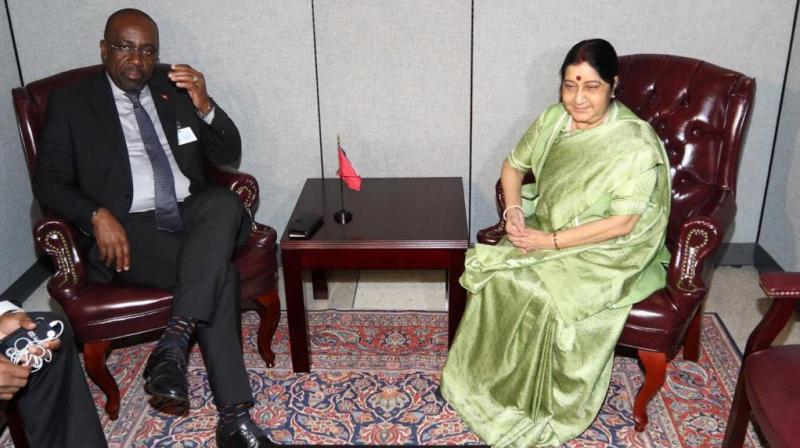 New York: The Antigua government has assured India of its full cooperation in the extradition of fugitive diamantaire Mehul Choksi, allegedly involved in the USD 2 billion scam in the Punjab National Bank (PNB), and conveyed its commitment to resolve the issue as quickly as possible, a senior official said Thursday.

External Affairs Minister Sushma Swaraj met Foreign Minister of Antigua and Barbuda E P Chet Greene here on the sidelines of the 73rd session of the UN General Assembly and raised the extradition issue of Choksi, who is currently in the Caribbean island.

"Greene conveyed to the EAM the assurances of his Prime Minister for the fullest cooperation of their Government in the matter of extradition of Mehul Choksi to India," Ministry of External Affairs Spokesperson Raveesh Kumar tweeted.

Raveesh Kumar told reporters that Greene told Sushma Swaraj he wanted to personally inform her about the Antiguan government and its Prime Minister's "commitment on Mehul Choksi's extradition."

The bilateral meeting had been requested by Greene, MEA spokesperson said, adding that Sushma Swaraj requested to him that there should be "expeditious resolution" of the matter.

Greene said his country too would like this issue to be resolved as quickly as possible within the framework of Antigua's law and court process. He added that Antigua's government will try its best to resolve the issue.

Greene informed Swaraj that there are certain legal angles and court procedures that need to be examined but conveyed full commitment on this issue.

Raveesh Kumar said the Antiguan minister conveyed that the extradition process itself has to go through a certain legal and court process in his country.

Choksi is one of the alleged masterminds of the USD 2 billion scam in state-run Punjab National Bank and is an uncle of fugitive diamantaire Nirav Modi. He is wanted in India by the CBI and Enforcement Directorate probing the fraud, the biggest banking scam in the country.

Choksi had fled India on January 4 this year and took oath of allegiance in Antigua on January 15. His valid passport was revoked in February 2018.