World   Americas  27 Jun 2020  Even before virus, communities in US feel loss of newspapers
World, Americas

Even before virus, communities in US feel loss of newspapers

Digital outlets also have limitations, since many people in poor and rural areas are unable to count on reliable high-speed Internet 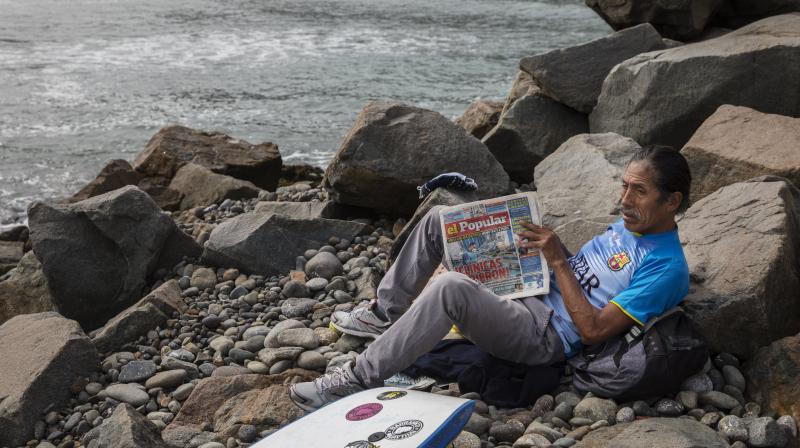 A man reads a newspaper next to the Pacific Ocean on the coast of Lima, Peru. (AP)

New York: If Penelope Muse Abernathy can take any solace in her grim work of counting how many newspapers across America have closed, it's that more people are becoming aware of the problem.

The North Carolina journalism professor's latest report out this week details the industry's decline from 2004 through 2019, a period that saw the loss of more than 2,000 newspapers and a 44% drop in circulation overall.

The result has left many communities without a local paper, a shift she said is being recognized by a broad range of people who notice a lack of strong local news coverage contributes to societal divisions and an erosion of trust in institutions.

"I see a big difference in awareness of the issue by community activists, government officials, by ordinary citizens and politicians," said Abernathy, professor at the Hussman School of Journalism and Media at the University of North Carolina and author of The Expanding News Desert report released Wednesday.

The report does not cover the coronavirus shutdown, which has led to 35 newspapers across the country shutting down the past few months. Also lost: a chain of 14 community newspapers around Chicago, according to the Poynter Institute think tank.

They include the Journal News in Knoxville, Iowa, founded by a Civil War veteran who was a friend of Abraham Lincoln, and the Edmond Sun, in Edmond, Oklahoma, which began in 1889, Poynter said.

Other closures included the Hendricks County Flyer in Indiana, the Merkel Mail in Merkel, Texas, the Havre Herald digital site in Havre, Montana, and the Mesquite Local News in Mesquite, Nevada. The

Waterbury Record in Vermont started in 2007 to fill a local news void but found good intentions only count so much.

Abernathy's research shows the harsh environment many outlets were facing before COVID-19 spread throughout the U.S. Among the findings: The number of newspapers in the United States declined from 8,891 in 2004 to 6,736 at the beginning of this year. Most are in small communities.

Total newspaper circulation sank from 122 million in 2004 to 68 million at the end of last year, and that includes digital readership.

The 71,640 reporters and editors working at newspapers in 2008 were cut by more than half in 10 years. The bulk of those cuts came in larger regional newspapers, some now called ghosts because of their diminished presence.

If society believes that it's important to boost local news, an influx in public money is almost certainly needed, Abernathy said. Politicians in both parties have made suggestions, but haven't coalesced behind specific ideas.

Philanthropies have stepped up, but donor money is often concentrated on specific subject matters, meaning less money for communities where help is needed to provide a more expansive news diet, she said. National Public Radio, PBS' Frontline and organizations like Report for America also have a new concentration on local news but the scale of the problem they're trying to solve is much larger.

In one encouraging sign, the report said 83 digital news operations began operating in 2019. Yet an equal number of such sites shut down. Most were in urban areas, often started by overburdened reporters working 80 hours a week, when they really need someone working an equal amount of time to make it a successful business, Abernathy said.

"It's just very hard to get traction," she said.

Digital outlets also have limitations, since many people in poor and rural areas are unable to count on reliable high-speed Internet, she said.

With more Americans now saying they get news from social media instead of newspapers, Abernathy's researchers examined Today in...,

Facebook's effort to put local news stories on the feeds of followers. In some places, the lack of local news outlets able to provide those stories hindered that effort.

During two months last year, researchers found that nearly half of the stories the Facebook news feeds around North Carolina were about crime or human interest. It meant that there was comparatively little news on education, health, minority groups, the economy, the environment and politics, the report said.