No tampons in US prison? #MeToo campaign brings issue to the fore

In Maryland, both chambers passed legislation on March 1 to put required free access to menstrual products into law. 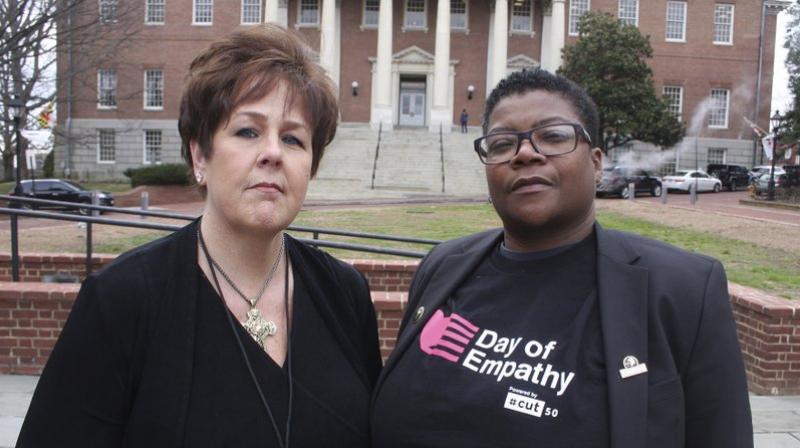 In this March 3, 2018 photo, Kimberly Haven, left, and Monica Cooper, two advocates for reforms in correctional facilities, pose for a photo in front of the Maryland State House in Annapolis, Md. (Photo: AP)

Annapolis: Kimberly Haven couldn’t get the feminine hygiene products she needed in Maryland’s only prison for women while serving a 15-month sentence, so she made her own using toilet paper. She said that after her release in 2015, she suffered toxic shock syndrome and needed an emergency hysterectomy.

“Toxic shock, emergency hysterectomies — it runs the gamut of how women are forced to pay for, with their very health, our bad policies and our inattention to the gender disparities that exist within our system,” Haven said.

Fuelled in part by the national #MeToo movement, state legislatures around the country — as well as corrections officials and the federal government — are working to supply prisons and jails with adequate feminine hygiene products, train staff, and raise awareness of the long-time, widespread issue.

In Maryland, both chambers passed legislation on March 1 to put required free access to menstrual products into law. The measures are nearly identical, so supporters don’t see an impediment to a final vote needed by each chamber to send the legislation to Guv Larry Hogan.

“I think that there is a wave, and I think there’s a lot of attention that’s being paid now to women, period — whether that’s #MeToo, whether that’s Time’s Up,” the anti-sexual harassment movement in Hollywood, said Monica Cooper, a former inmate who is the co-founder of the Maryland Justice Project, an advocacy group that focuses on the effects of the criminal justice system on women. “So, it’s something that’s coming to a town near you.”

Amy Fettig, deputy director for the American Civil Liberties Union’s National Prison Project, says the issue has emerged in the past year as part of a larger conversation about women in prison that simply wasn’t happening five to 10 years ago. The project works to ensure the nation’s prisons, jails and detention centres comply with the Constitution and international human rights principles.

“Even though women have been the largest increasing portion of the criminal justice system for two decades, they still are a relatively small portion compared to men, and so their needs and situations have been largely ignored, both in our criminal justice system and by the public at large, and that’s finally beginning to change because of the work of advocacy groups,” Fettig said. “I think it’s also because of the larger #MeToo movement and awareness about women’s status in this country and how far we still have to go, as well as popular culture.”

As an example, Fettig cited a recent episode of “Orange is the New Black,” a Netflix program about a woman’s prison, that focused on the lack of tampon access in prison.

Arizona’s corrections department announced in February, it would immediately triple the number of free sanitary napkins it automatically provides each month to female inmates to head off a proposal to provide unlimited free tampons, pads and other feminine hygiene products. As a result of the announcement, the legislation did not advance.

In Nebraska, corrections officials avoided the legislative process in January by announcing that generic tampons and pads would be provided for free and that it would charge inmates only for name-brand supplies. In Colorado in 2017, lawmakers included a provision in the state’s budget bill to provide incarcerated women with free access to tampons.

In 2016, New York became the nation’s first city to require free tampons and sanitary pads in correctional facilities, public schools and homeless shelters. It was a significant development, because it gave the requirement the force of law.

The Federal Bureau of Prisons in August issued a memo mandating that feminine hygiene products be available to all female inmates in federal institutions at no cost. Federal legislation titled the Dignity for Incarcerated Women Act has highlighted the issue.

In Maryland, lawmakers said they were shocked to hear former inmates describe the severity of a problem that undermines inmates’ health and dignity. Former inmates, including Haven and Cooper, testified that correctional officers have withheld the products to control inmates as part of an officer-prisoner power dynamic.

“There was a lot of surprise that this was being used as a keep-them-under-the-thumb sort of thing, and so that was kind of the uproar,” said Del Pamela Queen, a Democrat who sponsored one of the measures.

In addition to health risks, former inmates also say the resulting indignities have other impacts. For example, some women refuse visits from attorneys or family members out of embarrassment about bleeding through clothing, former inmates told Maryland lawmakers at a bill hearing last month.

In 2014, the ACLU of Michigan drew attention to the issue by filing a lawsuit on behalf of inmates at the Muskegon County Jail who did not have adequate access to menstrual supplies, raising awareness among advocates around the country.

Despite the rising attention, Fettig said much work remains.

“Every state needs to consider protecting its women behind bars in a more robust manner, and certainly ensuring that health and dignity are not sacrificed at the prison door,” Fettig said.