The right-wing president reported testing positive for coronavirus three times this month, including an initial diagnosis on July 7 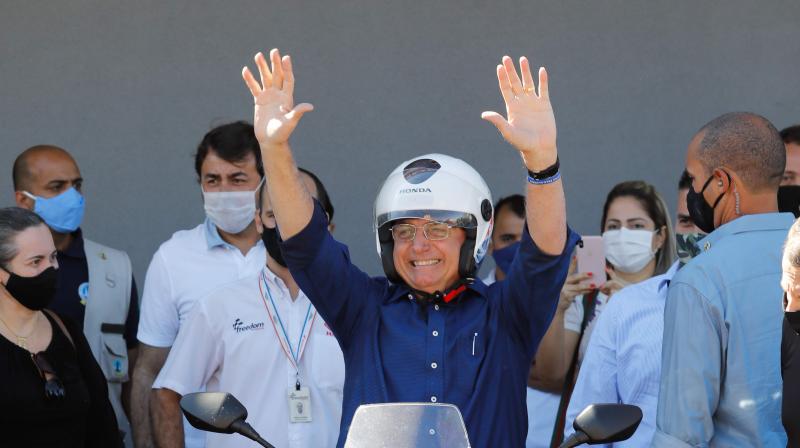 Brazilian President Jair Bolsonaro gestures before going out for a ride on his motorcycle after he announced he tested negative for COVID-19 more than two weeks after being diagnosed, in Brasilia. (AFP)

Sao Paulo: Brazilian President Jair Bolsonaro said on Saturday that he has tested negative for the novel coronavirus after weeks quarantined in his residence due to an infection.

In a photo posted to social media, Bolsonaro appeared with a box of hydroxychloroquine, an anti-malarial drug he credited for his recovery despite a lack of scientific evidence about its effectiveness. In an accompanying text, he said his RT-PCR test for Sars-Cov 2 was negative. He did not say when he took the test nor did he provide any further details.

Bolsonaro reported testing positive three times this month, including an initial diagnosis on July 7 for COVID-19, the illness caused by the new coronavirus.

Since then he has been in partial isolation at the presidential residence, filling his official agenda with videoconferences. He was spotted outdoors occasionally, including at a rally where he greeted supporters, removing his mask occasionally when at a distance of a few meters.

Bolsonaro’s coronavírus infection was one of more than 2.3 million cases in Brazil, second only to the United States. The pandemic has killed more than 85,000 people in Brazil.

Bolsonaro has played down the risks of the virus he called “a little flu” and defied public health experts and fought against governors and mayors imposing lockdowns to fight the pandemic. The right-wing populist has warned such policies are worse than the virus itself and urged businesses to reopen quickly.

Bolsonaro has said he would start traveling around the country after recovering from his illness.