Confident of more convergence between India-US: Modi in WSJ before Trump meet

Modi and Trump are due to hold afternoon talks and a working dinner at the White House, though no press conference is scheduled. 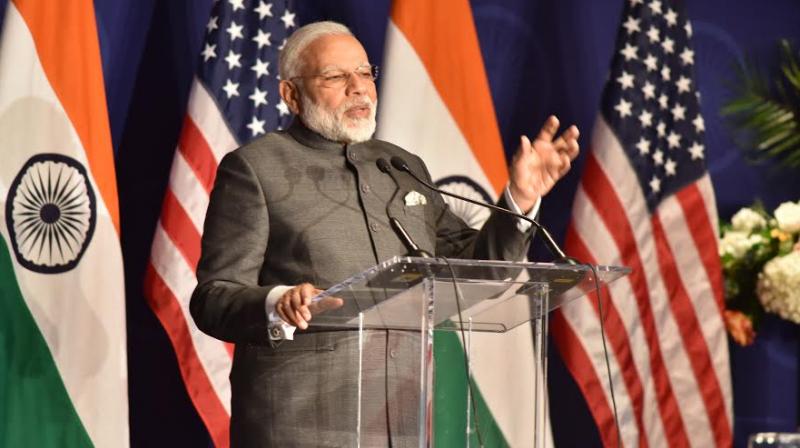 "Whenever India and the US work together, the world reaps the benefits," he wrote.

Quoting a few such collaborative efforts, he wrote, “The world reaps the benefits — be it our collaborative efforts to find affordable vaccines for rotavirus or dengue, our joint studies of gravitational waves, observations of distant planets, establishing norms for cyberspace, providing humanitarian assistance and disaster relief in the Indo-Pacific region, or training peacekeepers in Africa”.

My op-ed in the @WSJ on close India-USA relations and their strong potential. https://t.co/griO7EkwCu

Following a visit to the United States one year ago, when he addressed a joint session of the US Congress, Modi wrote that he returns "confident in the growing convergence between our two nations."

"This confidence stems from the strength of our shared values and the stability of our systems," Modi observed.

Also writing about India’s encounters with terrorism, Prime Minster stated that India has four decades’ experience in fighting terror, and shares the US administration’s determination to defeat this scourge.

“We are already working together to address the existing and emerging strategic and security challenges that affect both our nations—in Afghanistan, West Asia, the large maritime space of the Indo-Pacific, the new and unanticipated threats in cyberspace. We also share an interest in ensuring that sea lanes—critical lifelines of trade and energy—remain secure and open to all,” he wrote.

With India all set for GST rollout from July 1st, Modi said, “the transformation of India presents abundant commercial and investment opportunities for American businesses”.

As of now, India-US bilateral totals about $115 billion a year, poised for a multifold increase.

Also accrediting bilateral contribution in the Smart City initiative and affordable housing schemes, Modi explained how India is heading towards development. He said, “These plans also showcase the enormous fruits of our relationships with enterprising US partners.”

Modi also said that “In coming years, Indian companies will import energy in excess of $40 billion from the US, and more than 200 American-made aircraft will join the private Indian aviation fleet.”

The prime minister said, the three million Indian-American community has played a crucial role in connecting and contributing to our societies.

“I expect the next few decades to be an even more remarkable story of ambitious horizons, convergent action and shared growth,” he stated.

Modi and Trump are due to hold afternoon talks and a working dinner at the White House, though no press conference is scheduled.

Despite the upbeat rhetoric, the relationship between the two leaders has hit some initial snags.

Trump accused India of seeking to profit from the Paris climate accord as he announced the US withdrawal from the deal this month -- drawing sharp denials from New Delhi.

A proposed overhaul of H-1B visas -- used by thousands of Indian software engineers to work in the United States -- has also caused concern in New Delhi.