US has asked Pak govert to re-arrest and charge Saeed for his crimes. It also asked Pakistan to ensure that the LeT leader is behind bars. 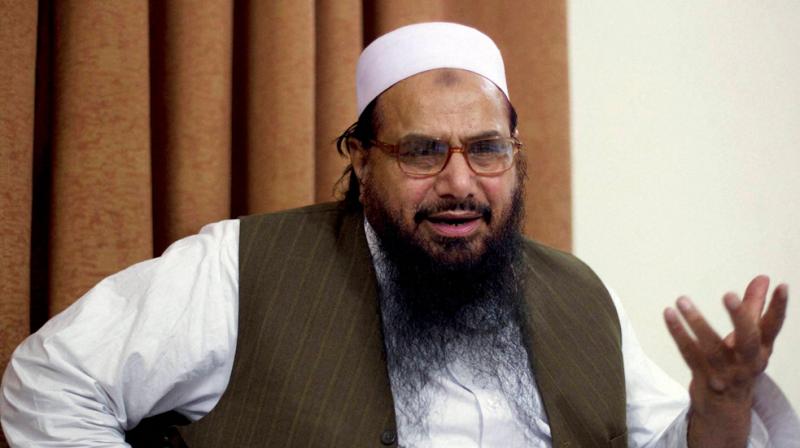 The Jamaat-ud-Dawah (JuD) head and LeT founder, who has a USD 10 million American bounty on his head for terror activities, was freed by Pakistan on Friday. (Photo: File | AP)

Washington: Mumbai attack mastermind and JuD chief Hafiz Saeed has "blood on his hands", and wants to bring extremism into the mainstream politics of Pakistan, a former top American spymaster said on Saturday.

The Jamaat-ud-Dawah (JuD) head and LeT founder, who has a USD 10 million American bounty on his head for terror activities, was freed by Pakistan on Friday.

"Saeed is a terrorist. Worked with the Lashkar-e-Taiba (LeT), a Kashmiri militant group, and al-Qaida on attacks," Michael Morell, former Central Intelligence Agency (CIA) deputy director, who has also served twice as its acting director, said in a tweet.

"He has blood on his hands. Now wants to bring extremism into the political mainstream in Pakistan," he said after Saeed, a UN and US designated terrorist, was released from house arrest in Lahore.

Saeed, in his late 60s, was under house arrest for 297 days since January. The fire-brand cleric's release after midnight came ahead of the 9th anniversary of the 26/11 Mumbai attacks in which 166 people, including six Americans, were killed.

A deeply concerned US has asked the Pakistan government to re-arrest and charge Saeed for his crimes. It also asked Pakistan to ensure that the LeT leader is behind bars.

"NO! JuD is NOT tied to Islamic State. What a rookie...Seriously. Hafiz Saeed's Release Completes the Political Mainstreaming of jihadists in Pakistan," tweeted Christine Fair, a well known South Asian expert on terrorist groups.

NBC news said Saeed's release could once again sour US relations with Pakistan. The New York Times said, for decades, Pakistan has cast a benign eye on groups like LeT which is perceived as an asset because its attacks target Indian soldiers in Kashmir even as the government battles jihadist groups like the Pakistan Taliban that directly threatens the country.

"But despite its pressure on Pakistan to move against militants like Saeed, the United States has also sent mixed messages. Just a month ago, the United States Senate struck down a provision tying American government funding to Pakistan to the country's efforts to curb Lashkar-e-Taiba's operations. The provision, part of a broader Pentagon funding legislation that Congress introduced this past summer, would have forced the secretary of defence to certify that Islamabad was thwarting Lashkar-e-Taiba's activities inside Pakistan or risk USD 350 million in American assistance," the Times wrote.

Meanwhile, in an op-ed, The Washington Examiner said the Trump administration "should work with India" to "capture or kill" Saeed.

"Trump should call Prime Minister Narendra Modi of India and offer to work with him to capture or kill Saeed," the daily said, adding that Saeed intends to lead a new Muslim theocratic political bloc in 2018's parliamentary polls.

"Although Pakistan's electoral commission has refused to certify the bloc, Saeed's populist power should not be understated. Charismatic and determined, if left unchecked in his political party or terrorist activities, Saeed could destabilise the region," the daily added.

The JuD is believed to be the front organisation for the banned LeT which is responsible for carrying out the Mumbai terror attack.