Opening the summit, President Biden said the four democracies have come together to take on common challenges from COVID-19 to climate 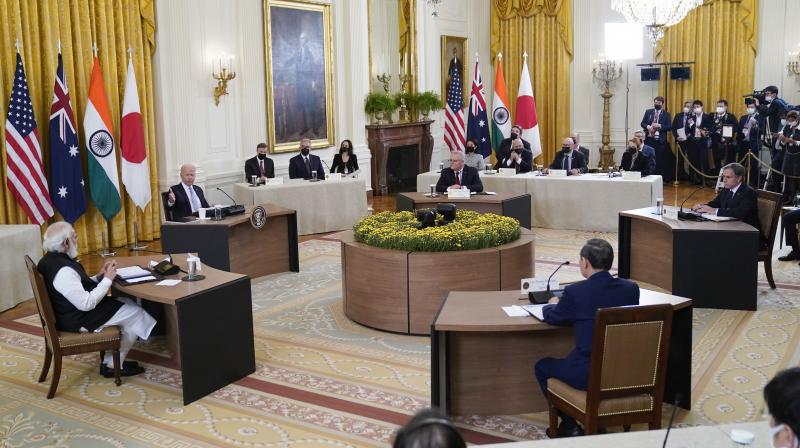 Washington: India, Australia, Japan and the US have pledged to work together for ensuring peace and prosperity of the Indo-Pacific and the world, as top leaders of the Quad grouping announced a slew of new initiatives to take on common challenges, amidst muscle flexing by an assertive China in the strategic region.

In a way, Quad would play the role as Force for Global good, Prime Minister Narendra Modi said in his short address on Friday and exuded confidence that this cooperation by the four democracies will ensure peace and prosperity in the Indo-Pacific region and the world.

Modi was the first leader invited by host President Joe Biden to address the first in-person Quad gathering in the East Room of the White House.

Biden, who earlier in the day had a more than an-hour long meeting with Modi, described the prime minister as My Friend."

Opening the summit, President Biden said the four democracies have come together to take on common challenges from Covid to climate. This group has democratic partners who share world views and have common vision for the future, he said.

"When we met six months ago, we made a concrete commitment to advance our shared positive agenda for free and open up the session. Today we are proud to say that we're making progress, Biden said. Australian Prime Minister Scott Morrison and his Japanese counterpart Suga were the two other leaders in the historic East Room.

The vaccine initiative is on track, Biden said, adding that the Quad is taking action on climate change with a new partnership for zero emission shipping.

"Today, we're also launching a new quad fellowship for students from each of our five countries to pursue advanced degrees in leading Science, Technology Engineering, and Mathematics (STEM) programmes through the United States, Biden said.

The four countries have a long history of cooperation. We know how to get things done. And we are up to the challenge, Biden said.

Thanking Biden for his initiative to organize this historic first ever in-person Quad Summit, Modi said the four countries came together for the first time in 2004 to extend support to the Indo-Pacific Region.

"Today, when the world is grappling with the COVID-19 pandemic, we are meeting once again as Quad and working in the interest of humanity, he said.

The Quad vaccine initiative is going to provide a great help to the nations in the Indo-Pacific region, he said.

"Based on our common democratic values, Quad has decided to move forward with positive thinking," he said. Be it supply chain or security, be it climate action or COVID response, or cooperation in the field of technology, Modi said he would be very happy to talk to the leaders at the meeting.

Australian Prime Minister Morrison said that the Indo-Pacific region should be free from coercion and disputes should be solved in accordance with international law, in a veiled reference to China.

"We believe in a free and open Indo Pacific, because we know that the limits are strong, stable, and prosperous freedomto realise their hopes and dreams to live in a liberal free society, he said.

Quad, he said, is about demonstrating how democracy such as these get things done, they can handle the big challenges in a very complex and changing world.

Observing that there is no part of the world that is more dynamic than the Indo-Pacific at this time, a region that has extraordinary opportunity, Morrison said that there are many challenges that must be overcome.

Prime Minister Suga of Japan, like the other three leaders, stressed the importance of the first ever in-person Quad Summit, saying this event demonstrates strong solidarity between our four nations and an unwavering commitment to a free and open Indo-Pacific.

"It gives me great pleasure to discuss with my friends wide ranging topics from supply chains to global security, from climate action to COVID response, to cooperation in the field of technology. A Quad, in a sense, will play the role of a force for global good. I'm confident that our cooperation, under Quad, will ensure prosperity and peace in the Indo Pacific and in the world, Modi said.

The leaders shared perspectives on the situation in Afghanistan, the emerging challenges in South Asia and Indo-Pacific, he said.

They reaffirmed their commitment to work together to contain the COVID-19 pandemic and work towards preventing the other pandemics that would come in the future, he said.

The leaders also discussed evolving a common approach to emerging technologies, cyber security and addressing the challenge of climate change and space cooperation, he added.

He said the joint statement has a strong language with regard to terrorism.

India, the US and several other world powers have been talking about the need to ensure a free, open and thriving Indo-Pacific in the backdrop of China's rising military manoeuvring in the region.

China claims nearly all of the disputed South China Sea, though Taiwan, the Philippines, Brunei, Malaysia and Vietnam all claim parts of it. Beijing has built artificial islands and military installations in the South China Sea.

Ahead of the Quad summit, Prime Minister Modi separately met his Australian and Japanese counterparts on Thursday and they reaffirmed the importance of maritime security towards the realisation of a "free and open" Indo-Pacific.

In November 2017, India, Japan, the US and Australia gave shape to the long-pending proposal of setting up the Quad to develop a new strategy to keep the critical sea routes in the Indo-Pacific free of any influence, amidst China's growing military presence in the strategic region.