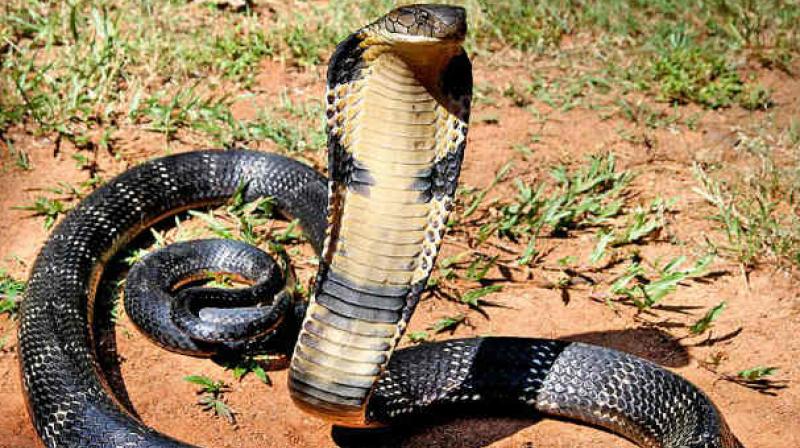 The cobra - "Naja," in Portuguese - has meanwhile become an internet sensation, after being found near a shopping center where it was allegedly abandoned by a friend of Lehmkuhl's trying to get rid of evidence. (AFP)

Rio De Janeiro: A cobra that bit a veterinary student in Brazil, putting him in a coma, has turned into a celebrity by sparking an investigation into an alleged exotic animal trafficking ring.

The monocled cobra, which is native to Asia, bit 22-year-old Pedro Krambeck Lehmkuhl on July 7 in Brasilia, sending doctors on a frantic search for the right antivenom -- so rare in Brazil that the lone doses had to be rushed from Sao Paulo.

Questions about how the snake ended up at the student's apartment soon turned into a police investigation that found 16 other snakes at a property belonging to a friend of Lehmkuhl's, as well as three sharks, seven more snakes, a Moray eel and a Tupinambis lizard at another property.

So far the probe has led to the firing of two officials at the Brazilian environmental regulator, IBAMA, over suspicions they facilitated fraudulent import permits for a wildlife trafficking ring.

The student's mother and stepfather, a police colonel, were also questioned and fined 8,500 reals (about $1,600) each on a charge of obstructing justice.

Lehmkuhl, who spent six days in the hospital, was released and fined 61,000 reals. He is still under investigation.

The cobra -- "Naja," in Portuguese -- has meanwhile become an internet sensation, after being found near a shopping center where it was allegedly abandoned by a friend of Lehmkuhl's trying to get rid of evidence.

"In less than a week, I have taken revenge on my oppressor, dismantled an animal trafficking ring, freed more than 16 friends, helped a shark and struck fear in the traffickers' hearts," it posted on July 11 -- one of several tweets that have gone viral, mixing references to Brazilian pop music and telenovelas with humorous jabs at animal trafficking.

The snake is now living at the Brasilia Zoo, which showed off "Brazil's most famous cobra" in an Instagram live video Friday.

The zoo's reptiles director, Carlos Nobrega, explained the 1.5-meter (five-foot) snake's care and diet to rapt fans as it slithered about its enclosure.

Despite its ordeal, "everything seems to be OK" with the cobra, he said.