After a gap in the livestream, the driver is seen leaning over the body of the girl, trying to shake her awake and saying she was sorry. 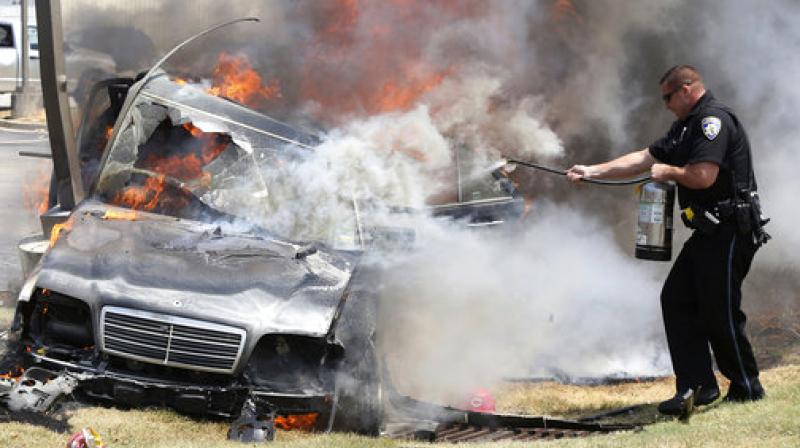 Authorities say Obdulia Sanchez, 18, was driving the car Friday when it veered onto the shoulder of a road about 75 miles (120.7 kilometers) northwest of Fresno. (Photo: Representational/AP)

Fresno (California): A teenage driver lost control of her car while she was livestreaming on Instagram and recorded part of the crash that authorities say killed her younger sister in California.

After a gap in the livestream, the driver is seen leaning over the body of the girl, trying to shake her awake and saying she was sorry. She said she expected to spend the rest of her life in prison but doesn't care.

"This is the last thing I wanted to happen, OK? Rest in peace, sweetie," the teen says. "If you don't survive, I'm so (expletive) sorry."

Authorities say Obdulia Sanchez, 18, was driving the car Friday when it veered onto the shoulder of a road about 75 miles (120.7 kilometers) northwest of Fresno. She overcorrected, causing the vehicle to swerve and overturn into a field, ejecting her sister, the California Highway Patrol said on Monday.

Jacqueline Sanchez, 14, of Stockton died in the crash, Merced County Sheriff Vern Warnke said. Another girl, also 14, was in the backseat and survived with a leg injury. The driver was wearing a seatbelt but not the two girls, the CHP said.

The teenagers' father, Nicandro Sanchez, told Fresno television station KFSN that he has seen the video and that he believes the crash was "an accident." "It's an accident," Nicandro Sanchez said. "It happened that way. Who knows why?" He said he hasn't spoken to Obdulia but he believes she knowns she did something wrong but doesn't know what happened.

"What I think is she knows she's done something wrong. Because she knows, and that's what I feel. She feels bad for herself, but she killed her own sister," he said. Nicandro Sanchez said Obdulia had a difficult childhood and graduated from high school last year. She was in the custody of Child Protective Services the past two years, he added.

Obdulia Sanchez was arrested on suspicion of drunken driving and vehicular manslaughter and remained in jail with bail set at $300,000. The livestream was recorded on Instagram and posted on Facebook by someone who had seen it. Stockton resident Mary Hernandez said she saw the video there and reposted it.

"People need to know these things can happen," Hernandez said, adding that she had gotten a range of responses from anger to gratitude. "I mean no disrespect to their family for posting it," she said. Hernandez said she knew about Obdulia Sanchez through social media, but they never met in person.

Rob Carroll, a chief deputy in the Merced County District Attorney's Office, said he had not yet seen the video. But he expects it will be a key piece of evidence.
"Drinking, driving and driving erratically - obviously those are poor choices," Carroll said.

Relatives have set up a GoFundMe page to pay for the funeral of Jacqueline Sanchez. The page says she was planning to celebrate her 15th birthday known as a quincenera - on Sunday. Her parents, however, told the television station Jacqueline was going to be confirmed in a Catholic church.

Neither Obdulia Sanchez nor an attorney representing her could be reached for comment She is expected to make her first court appearance Wednesday.