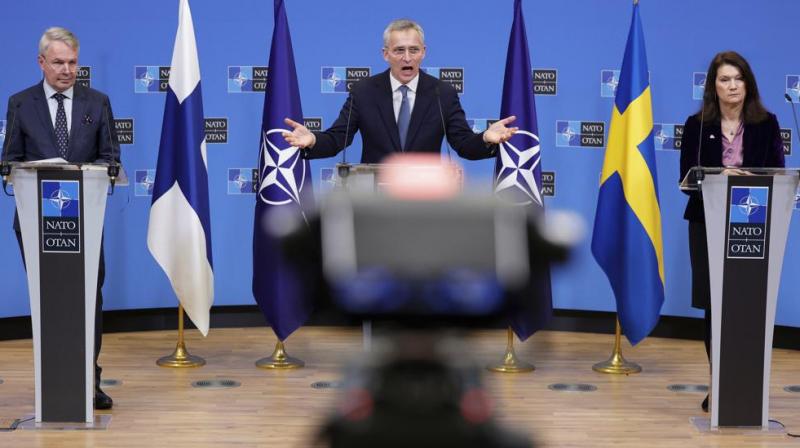 WASHINGTON: The Pentagon ordered 8,500 troops on higher alert to potentially deploy to Europe as part of a NATO “response force” amid growing concern that Russia could soon make a military move on Ukraine. President Joe Biden consulted with key European leaders, underscoring U.S. solidarity with allies there.

Putting the U.S.-based troops on heightened alert for Europe on Monday suggested diminishing hope that Russian President Vladimir Putin will back away from what Biden himself has said looks like a threat to invade neighboring Ukraine.

At stake, beyond the future of Ukraine, is the credibility of a NATO alliance that is central to U.S. defense strategy but that Putin views as a Cold War relic and a threat to Russian security. For Biden, the crisis represents a major test of his ability to forge a united allied stance against Putin.

Pentagon press secretary John Kirby said about 8,500 U.S.-based troops are being put on alert for possible deployment — not to Ukraine but to NATO territory in Eastern Europe as part of an alliance force meant to signal a unified commitment to deter any wider Putin aggression.

Russia denies it is planning an invasion. It says Western accusations are merely a cover for NATO’s own planned provocations. Recent days have seen high-stakes diplomacy that has failed to reach any breakthrough, and key players in the drama are making moves that suggest fear of imminent war. Biden has sought to strike a balance between actions meant to deter Putin and those that might provide the Russian leader with an opening to use the huge force he has assembled at Ukraine’s border.

Biden held an 80-minute video call with several European leaders on the Russian military buildup and potential responses to an invasion.

“I had a very, very, very good meeting -- total unanimity with all the European leaders,” Biden told reporters at the White House. “We’ll talk about it later.”

The White House said the leaders emphasized their desire for a diplomatic solution to the crisis but also discussed efforts to deter further Russian aggression, “including preparations to impose massive consequences and severe economic costs on Russia for such actions as well as to reinforce security on NATO’s eastern flank.”

A day earlier, the State Department had ordered the families of all American personnel at the U.S. Embassy in Kyiv to leave the country, and it said that nonessential embassy staff could leave at U.S. government expense.

Ukraine’s Foreign Ministry spokesman, Oleg Nikolenko, said that U.S. decision was “a premature step” and a sign of “excessive caution.” He said Russia was sowing panic among Ukrainians and foreigners in order to destabilize Ukraine.

Britain said it, too, was withdrawing some diplomats and dependents from its Kyiv Embassy. Prime Minister Boris Johnson said an invasion was not inevitable but “the intelligence is pretty gloomy.”

Ordering even a modest number of American troops to be ready for potential deployment to Europe is meant to demonstrate U.S. resolve to support its NATO allies, particularly those in Eastern Europe who feel threatened by Russia and worry that Putin could put them in his crosshairs.

“What this is about is reassurance to our NATO allies,” Kirby told a Pentagon news conference, adding that no troops are intended for deployment to Ukraine, which is not a member of the alliance but has been assured by Washington of continued U.S. political support and arms supplies.

The Pentagon’s move, which was done at Biden’s direction and on Defense Secretary Lloyd Austin’s recommendation, is being made in tandem with actions by other NATO member governments to bolster a defensive presence in Eastern European nations. Denmark, for example, is sending a frigate and F-16 warplanes to Lithuania; Spain is sending four fighter jets to Bulgaria and three ships to the Black Sea to join NATO naval forces, and France stands ready to send troops to Romania.

In a statement prior to Kirby’s announcement, NATO said the Netherlands plans to send two F-35 fighter aircraft to Bulgaria in April and is putting a ship and land-based units on standby for NATO’s Response Force.

NATO has not made a decision to activate the Response Force, which consists of about 40,000 troops from multiple nations. That force was enhanced in 2014 — the year Russia seized Ukraine’s Crimea Peninsula and intervened in support of pro-Russian separatists in eastern Ukraine — by creating a “spearhead force” of about 20,000 troops on extra-high alert within the larger Response Force.

If NATO does decide to activate the Response Force, the United States will contribute a range of military units, Kirby said.

“It is a NATO call to make,” Kirby said. “For our part, we wanted to make sure that we were ready in case that call should come. And that means making sure that units that would contribute to it are as ready as they can be on as short a notice as possible.”

He said some units will be ordered to be ready to deploy on as little as five days’ notice. Among the 8,500 troops, an unspecified number could be sent to Europe for purposes other than supporting the NATO Response Force, he said. Without providing details, he said they might be deployed “if other situations develop.”

Prior to the U.S. announcement, NATO issued a statement summing up moves already described by member countries. Restating them under the NATO banner appeared aimed at showing resolve. The West is ramping up its rhetoric in the information war that has accompanied the Ukraine standoff.

Russia has massed an estimated 100,000 troops near Ukraine’s border, demanding that NATO promise it will never allow Ukraine to join and that other actions, such as stationing alliance troops in former Soviet bloc countries, be curtailed.

NATO said Monday it is bolstering its deterrence in the Baltic Sea region.

The alliance will “take all necessary measures to protect and defend all allies,” Secretary-General Jens Stoltenberg said. “We will always respond to any deterioration of our security environment, including through strengthening our collective defense.”

In Moscow, Kremlin spokesman Dmitry Peskov said it was NATO and the U.S. who were behind the escalating tensions, not Russia.

The NATO announcement came as European Union foreign ministers sought to put on their own fresh display of unity in support of Ukraine, and paper over concerns about divisions on the best way to confront any Russian aggression.

In a statement, the ministers said the EU has stepped up sanction preparations, and they warned that “any further military aggression by Russia against Ukraine will have massive consequences and severe costs.”