US, China agree on UN sanctions against N Korea

The key provision of the proposed new sanctions would be a cap on North Korea's coal exports to China. 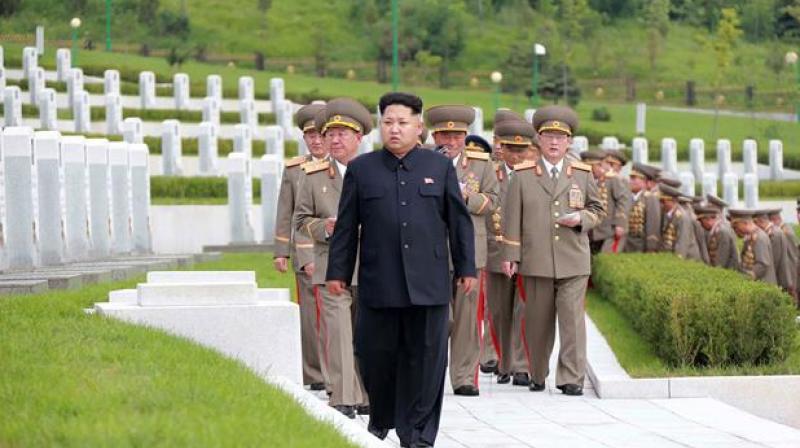 North Korea carried out its fifth and biggest nuclear test on September 9, claiming it had made major strides in its efforts to fit a miniaturized warhead on a rocket that could reach the United States.(Photo: AP)

United Nations: The United States and China have agreed on a new raft of tougher UN sanctions against North Korea in response to Pyongyang's fifth and biggest nuclear test, a Security Council diplomat said Wednesday.

Although Russia has expressed reservations about the draft resolution, they should not stand in the way of a Security Council vote on the new package of punitive measures as early as next week, the diplomat said.

The key provision of the proposed new sanctions would be a cap on North Korea's coal exports to China, Pyongyang's main trading partner and ally, that could deprive the communist hermit state of tens of millions of dollars in revenue.

"The key thing is that China and the US have gotten to a position where they can agree on," the diplomat said on condition of anonymity.

"The Russians are trying to hold it up, the Chinese are comfortable with it in terms of the content," he added.

The diplomat described the proposed resolution as a "very meaty" document that would close loopholes from the measure the council adopted in March, the toughest sanctions yet imposed on North Korea.

They would target coal exports, allowed under the previous measure for "livelihood purposes" if the revenue does not go toward financing Pyongyang's nuclear or ballistic missile programs.

Chinese coal imports from North Korea have surged in recent months amid fears that the funds are helping bankroll Pyongyang's military programs prohibited under UN resolutions.

New names of officials and entities linked to North Korea's ballistic and nuclear programs would be added to the UN sanctions blacklist, which provides for a global travel ban and an assets freeze.

"It is high time for the Security Council to come together to tighten up the sanctions regime against DPRK, to impose additional measures," British Ambassador Matthew Rycroft said.

The new measures would be introduced next week, he added.

China and the United States have spent three months negotiating the latest measures, which would be the sixth set of UN sanctions imposed on North Korea since its first nuclear test in 2006.

The breakthrough on the new sanctions followed a meeting between Obama and Chinese President Xi Jinping over the weekend during which the US president pressed for tougher measures against Pyongyang.

North Korea carried out its fifth and biggest nuclear test on September 9, claiming it had made major strides in its efforts to fit a miniaturized warhead on a rocket that could reach the United States.

The reclusive regime has carried out more than 20 missile tests this year, one of which reached Japanese-controlled waters after a launch in August.